Opponent Too Defensive? Use The Knee On Belly Pressure & Have Some Fun 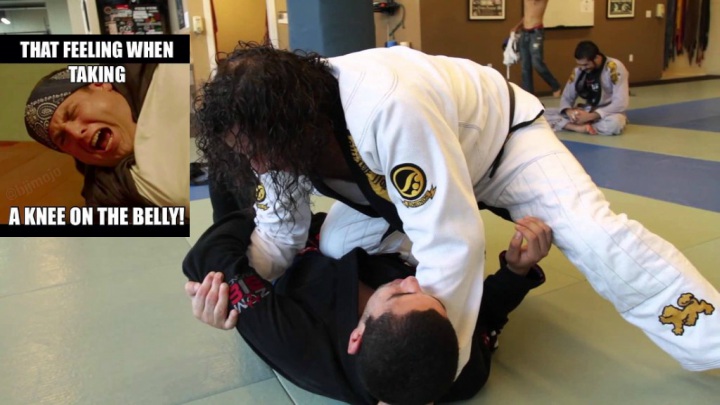 Let’s say you’ve passed your opponent’s guard, ended up in Side Control and that you’re trying to find a way to finish them from there… However, they’re too defensive – their elbows are tight to their body and they’re not trying to escape, leaving you with no openings to set up your submissions! What should you do from there?
Jon Thomas, black belt under Romero Jacaré Cavalcanti and Lucas Lepri, shows a great solution to this problem: the Knee On Belly pressure.

THE KNEE ON BELLY SETUP

Jon says that, as he is a lighter guy himself, he finds that the best way to make someone give him the submission is by making them uncomfortable. A great way to do that, and especially when you want to control someone heavier than you, is through good Knee On Belly pressure.

The way Jon usually sets the position up is:

1) He puts his thumb inside his opponent’s collar (behind their neck).
2) Then, he places shoulder pressure on their chin – not too much of it, but just enough to keep them in place.
3) He grabs the material at his opponent’s hip, using his palm to keep their hip pinned down.
4) From there, Jon jumps to the Knee On Belly position.

However, often times the opponents will raise their knee and keep it tight to their elbow, in order to block the space necessary for the Knee on Belly. What to do from there, then?
In this situation, Jon shows that you can first come up with your other knee to your opponent’s chest, placing pressure on it. In order to alleviate the pressure, they will put their arm up to your knee – which opens up the space that was previously blocked, making it possible for you to switch your other knee to the Knee On Belly position.

ALTERNATE YOUR KNEES AND FRUSTRATE THEM

From there, Jon demonstrates that he likes to slide his knee to his opponent’s „floating rib“ – the last rib in their lower rib cage. Once there, he places pressure and moves his knee around a lot, making his opponent uncomfortable – and making them react by trying to push the knee off of themselves.
Once they do this, Jon shows that you can switch to your other knee and place it back on their chest (pro tip: on their neck, even), which makes them extremely uncomfortable there as well. Then, switch back to the Knee On Belly… And keep alternating your knees to frustrate them.

As you make them uncomfortable more and more, they’ll start doing things in order to ease up the pressure they feel. By doing that, they won’t stay as tight as they were beforehand; thus giving you space for setting up submissions.

One common way that this will happen is that the opponent will try to push off your knee with their opposite hand, which gives you a chance to get an underhook – from where you have heaps of options for a finish.
Another great attack from the Knee On Belly position, Jon demonstrates, is set up by grabbing the sleeve of your opponent’s near arm, while getting a cross-collar grip with your other hand. This position is a very strong one, as you can use it to pull your opponents up and thus place additional pressure on them; to which they’ll often respond by turning away from you, which you can then use to set up attacks. Baseball Bat Choke is another great option.

Watch the video below to see Jon explaining how to use the Knee On Belly pressure to its fullest potential: