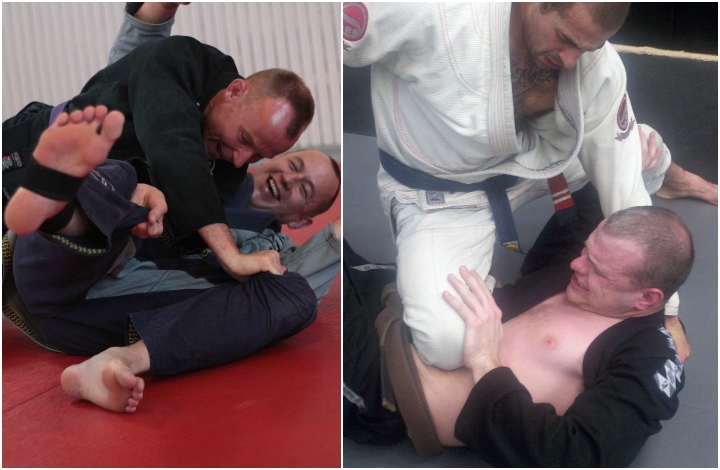 Brazilian Jiu-Jitsu is growing at an amazing rate worldwide. More people are training in all corners of the world. BJJ is evolving.  ‘Jiu-Jitsu for everyone‘ and ‘Keep it playful‘ are phrases that are used by 2 major BJJ academy chains. It means that Jiu-Jitsu can be trained by the general population: from kids to the serious BJJ competitor to the middle age accountant who wants to lose weight and learn to defend himself. Also by ‘keeping it playful’ they become more creative with their Jiu-Jitsu, they avoid injuries and are able to roll into their 90’s.

The idea is very good. We want to spread Jiu-Jitsu all over the world and we also want to train for life and avoid injuries. There is a worrying problem though. The problem with these phrases is that, with the growing popularity of BJJ, we are faced with a new real phenomenon: The ‘P*ss*fication’ of Brazilian Jiu-Jitsu…

‘P*ss*fication’ is the state in which a society becomes less and less tough. This word’s originator is the famous comedian George Carlin:

“We are undergoing a puss*fication of our entire society.”

Using soft language and avoiding confrontation and critisizm has resulted in the complete puss*fication of the american youth, as manifested by “emo”, and “cyberbullying”

Carlson Gracie led an extremely successful competition and Vale Tudo team. He believed in hard training to achieve success in BJJ. His motto was: “The Become a lion, you have to train with lions”. It is not a macho thing. It is the belief that iron forges iron.

People like the idea of training Jiu-Jitsu but are not willing to train as hard as is needed to improve. They are looking for a quick fix.

Let’s compare Jiu-Jitsu and Wrestling. In most BJJ schools (there are exceptions as some competition focused BJJ schools train HARD) people train nowhere near at the same intensity as in wrestling.
A BJJ school is usually a business. If BJJ instructors would force their clientele (students) to train the same way wrestlers who are fighting for their place on a team then they will go out of business very quickly.
Wrestling is part of a school or University and are not profit driven as they are funded differently. Wrestlers will compete every weekend so they have to train hard all the time during the season.

The student structure is different. At wrestling you will have younger and more athletic people since they are all competitors whereas in a regular BJJ academy, you will also have middle age office workers that just to lose weight and learn how to defend themselves. In BJJ you get the general population.

There are many. Mostly the ones which are competition focused. Schools such Atos for example. They will train hard but still not as hard as big Division 1 wrestling programs.

What are the main points of ‘Puss*fication’ of BJJ:

1.Limited takedowns being taught to BJJ practitioners. BJJ is becoming mainly a groundfighting sport instead of a complete martial art/ combat sport. How are you going to deal with an athletic attacker/ competitor if all you can do is a basic double leg takedown and pull guard?

GSP’s coach Firas Zahabi was very critical about Jiu-Jitsu’s use in MMA in a recent interview with Sherdog.com. Firas is a BJJ black belt but feels that the fact that Jiu-Jitsu players don’t learn takedowns is a huge handicap for them. He cites Jose Aldo as a great example of BJJ player who has adapted perfectly to MMA:

Wrestlers are learning jiu-jitsu, and jiu-jitsu guys aren’t so open-minded to the wrestling. They don’t understand that wrestling is as technical as jiu-jitsu. It’s jiu-jitsu standing up, why are you not in love with it? Why doesn’t it fascinate you?

Dustin Denes, BJJ black belt with a strong wrestling background, talks about the ‘Pussification’ of BJJ:

2. Some schools with limited hard sparring and using more ‘flow’ sparring. I’ve been a guest at some academies where just 15 minutes were used for sparring out of 1h30 of training. Of course, rolls started on the knees. If you would get up, the students would tell you that they didn’t want to get injured…How are you going to learn a technique if you don’t put it into practice against a resisting opponent?

In the words of Rio Grappling Club leader Roberto Atalla, sparring and more sparring needs to be part of BJJ:

BJJ needs sparring and more sparring, putting yourself out of your comfort zone, accepting defeat and learn to win, respect and persistence, and we all know that most people will quit in the first months or year. No, BJJ is for all those who are not shy of working hard and again for the rest of their lives, and the rest of you can stay lazy watching TV on their couches.

3. Students focusing too much on sport specific techniques (50/50 lapel guard) which are no use in MMA or for self defense. BJJ has evolved into a sport phase. Sport and competition are generally a good thing as it gives student motivation to train harder, but if all students only focus on are sport specific techniques, the real aspect aspect of Jiu-Jitsu (self defense) gets lost. as BJJ instructors it is our duty to share with our students the roots of Jiu-Jitsu which are self defense and Vale Tudo (Old version of MMA).

I’m not saying that we should follow the same work ethic as wrestling. Training hard all the time will destroy your body. How many wrestlers you know are still active past their 40’s? I truly believe that Jiu-Jitsu should be trained into the advanced stages of your life. Keep ‘Jiu-Jitsu for everyone’ and do ‘Keep it playful’ but still make everyone tougher:

– Impose lots of sparring and work more on stand up.

– Push for sport BJJ and competitions but always teach all students self defense as well.

At the end of the day, we are here to change people’s lives for the better through Jiu-Jitsu.