Submit Everyone With The Leg-in Triangle From Everywhere 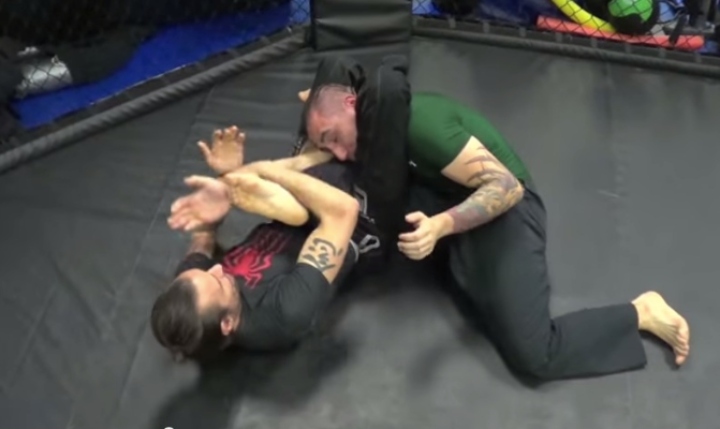 The… What? Yes – the Cryangle! *Spooky music plays in the background*
Yes, this position does feel as terrifying as it sounds, and you can use it both as a choke in and of itself, as well as a setup for other submissions. You can, that is, if you want to make your opponents miserable.
What makes it so effective, and how can YOU use it? Let’s dive right into it!

How does the Cryangle (also called a Leg-In Triangle) look like, though? Here are three examples:

Rodrigo Cavaca using it to reinforce his footlock at the World’s:

Cryangle used for a Kimura finish, in the 2017 Pan Ams – Black belt division:

And here’s a third example, showing a setup from the straight ankle lock in a quick fashion:

So, we’ve had an overall look at the technique. Let’s now look at the various positions you can set it up from!

BJJ After 40’s Mike Bidwell first shows an entry from a situation when your opponent has an Open Guard. Let’s break it down into steps:

1) This entry works best, Mike shows, if your opponent has a De La Riva Guard. Even if they don’t have it, you can still take their leg and push it down, behind your own leg – which is the first requirement.

2) Spin and sit back on your opponent’s stomach, just as if you were going for a kneebar.

3) Instead of going for a kneebar, pull your opponent’s leg while diving your arm through and then behind their neck.

5) Your other hand goes under your own shin, meeting the palm of the other hand at your opponent’s neck to form a cable grip.

6) You can get a submission from here immediately, with a shin choke. However, if they defend by pulling your leg off their neck…

7)… you then have your chance – lock in the Cryangle and finish with either an armbar, a kneebar or a toehold.

You can use a slight variation of this setup when you are in a top Half-Guard.
Namely, as your opponent tries to push you away in order to create space, use that opportunity to do a backstep. Then, sit back on their stomach and dive through with your arm under their legs, after which you’ll be going for the same setup the case was for the Open Guard.

Look at these setups in more detail below:

Yes, you can set up a Cryangle from the 50/50 position as well! ZombieProof’s Kent Peters demonstrates getting a Cryangle Kneebar from it:

But, how does the setup look like? Kent shows it from a failed heel hook attempt, when your opponent defends by grabbing your head:

1) Place your hand on their chest; you’ll be using it to push them away.

2) Grab your top leg’s foot with your other hand. Grab it at the toes, so that you can point it towards the floor – this will make it easier for you to pull the foot out.

3) Push your opponent’s chest in order to create space and pull through with your leg.

4) Kick the leg over their shoulder and grab their head, so that you can pull it down.

5) Grab your shin and lock in the Cryangle.

6) How do you want to finish them from here – do you want an armbar? A kneebar? Perhaps a heel hook? Or, maybe the Cryangle Choke itself? The choice is yours.

Here’s Kent demonstrating it in detail:

Also, here’s a way that you can use this setup when your opponent has a knee shield in place:

We’ve mentioned the Cryangle setup from a straight ankle lock situation at the beginning, but let’s now see it at work!

Chad Hardy demonstrates this one by going for a straight ankle lock from the bottom position; where he’s also managed to take control over his training partner’s collar. If your opponent starts leaning forwards and drops their head down when you get them into this position, you have your Cryangle chance.

Firmly pull their collar down, shooting your hips up and kicking your leg over their shoulder after doing so. Then, grab your shin and pinch your knees, so that you keep your opponent’s posture broken down. Lock your legs like you would in a regular triangle – and as your opponent falls down to the side, you have your choice over submissions at disposal yet again.

You can hit the Cryangle from Side Control as well – especially if your opponent’s elbows are not tucked in properly and their arms are out in the open! Here’s how:

1) Make sure that you have a secure Side Control in place, controlling your opponent with your grips behind their shoulder blade.

2) Switch your hips so that they face your opponent’s hips.

3) Place your knee under your opponent’s knee, pushing it towards their chest in order to create space.

4) Use this space to push your foot through it, placing it next to their far hip.

5) Fall back while pummeling your arm underneath their leg and while grabbing your bottom leg’s shin with your other arm – which goes underneath your opponent.

6) Lock in your Cryangle and choose your submission!

Here’s a demonstration of this setup; paired with two other, minor variations of the 50/50 and Open Guard setup – as well as with one possibility for when they have your back:

For your enjoyment, here’s a few more of leg-attack based entries which can lead to a Cryangle (such as from an Imanari roll) and finishes, demonstrated by Mike Bidwell:

And also a variation from a modified Omoplata. Have fun!