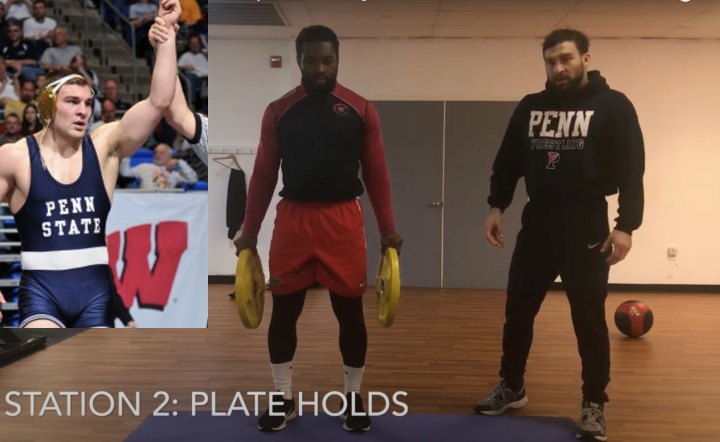 You can have all of the grappling skills in the world that you want, but if you don’t have enough cardio to go through a difficult match – then those skills won’t matter! So, it’s needless to say that you should work on your cardio regularly… And not just while you are on the mats; but in the gym as well!
Dan Vallimont, a two-time NCAA All-American wrestler, understands the importance of cardiovascular training. As a matter of fact, he decided to share a sneak peek into one of his endurance workouts!

Dan’s workout is by no means an easy one, which can be noticed immediately from the get-go. For his warm up, he starts off with 20 minutes on the elliptical machine; followed with 10 minutes on the Airdyne/Bike. Dan emphasizes that he does both of these exercises at over 250 Watts for the entire time being.
After that, he moves on to the second part of the warm up; jumping rope. He does 700 skips, which he follows up with a 5 minute set on the infamous rowing machine.

We know what you’re thinking. Yes, that’s just a warm up for Dan! When he finishes with it, he moves on to the actual workout.

Dan’s workout is done in a circuit fashion; meaning, very little rest (if any!) in-between the exercises, with the only time to rest being after a round gets done. So, the exercise Dan begins his workout with is, yet again, jumping rope; this time, he does 100 skips.

The next one in line are knee hops with dumbbells. Dan advises everyone to pick the weight that will challenge them. The exercise itself is quite simple: you just need to grab two dumbbells, get down to your knees and jump forward to your feet. From there, get down to your knees again and repeat. Pay attention, however, to how Dan lowers himself to his knees with ease and control – don’t let yourself slam down! Do it slowly and keep your knees healthy!
Dan doesn’t give out a specific number of repetitions that you have to do for this exercise. He just does it from one end of the gym to another.

Then, he grabs a medicine ball and performs a fantastic Wrestling-specific exercise, called medicine ball slams! To do it, slam the medicine ball to the ground in almost the same fashion you’d do a Snap Down; make sure not to stay in place, but to move and change position while still preserving your Wrestling stance. As far as the repetitions are concerned, Dan does 15 of them.
And after he’s finished with the medicine ball slams, Dan moves to the final exercise in this circuit: box jumps. He emphasizes that you should do these in a quick fashion; the moment your feet hit the ground, you need to jump back up! Dan does this for the count of 10 repetitions.

CORE EXERCISE FOR THE FINISH

After he’s done with this circuit, Dan finishes the workout with a neat core exercise; with something he calls the „Rocky Abs“ exercise. Essentially, he positions his tailbone to the edge of a bench, grabs a hold of it, gets his knees close to his chest and then straightens his legs out. From there, he lowers them down with control and then back up – doing this for a total of 10 reps and 3 sets.

Doesn’t seem so easy, does it? Watch Dan demonstrate this tough cardio workout on the video below: