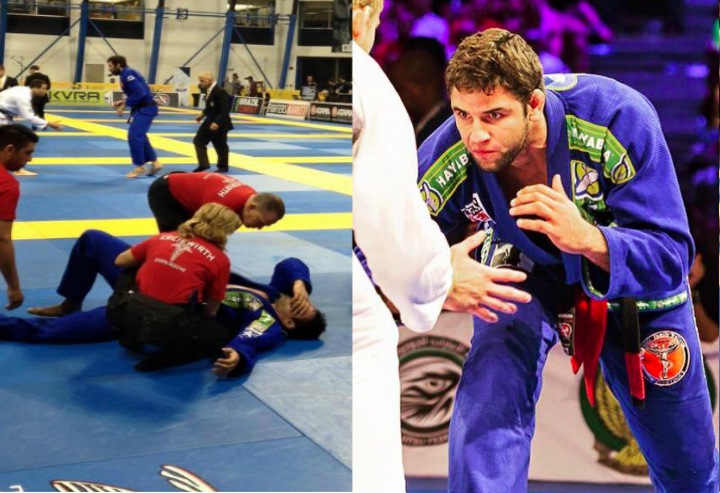 Guest post by Ben Whybrow Bsc (Physiotherapy), MCSP, ACPSEM. Ben is a Musculoskeletal and Sports Physiotherapist living and working in Cambridgeshire, graduating from the University of Hertfordshire in 2014. In addition to this Ben is the Squad Physiotherapist for Comberton Judo and he also works with Tsunami MMA.  Ben’s website is thejudophysio.com.

If there is one joint that causes more panic and stress among martial arts athletes it’s the knee. Black eye? “No problem”, Broken fingers? “I’ll just tape it”, Dislocated shoulder? “It will go back in”. Then a knee sprain occurs and suddenly out comes the inner drama queen and the worry sets in. Why is this? I’m not sure, the most likely reason is that martial arts athletes have to repeatedly twist/pull/push through their knees when striking/throwing/blocking etc, and it doesn’t help that the media have blamed many athletes careers ending due to severe knee injuries.

In grappling martial arts (Judo, Wrestling, BJJ) the knee is the most frequently injured area (ref) , whilst for striking martial arts (Kickboxing, TKD, Karate, Muay Thai, Boxing) it is one of the most commonly injured areas outside of the head and fingers (ref). Minor sprains and strains are generally the most common type of injury primarily occurring during training, though bone breaks and soft tissue tears can happen (ref). Hence it is of high importance that we try and reduce the risk of these injuries occurring in martial arts athletes.

Before reading any further, if you haven’t already read the post below about fundamentals of injury prevention for martial arts athletes as it all applies to knee injuries and I will not repeat it here.

The Anterior Cruciate Ligament (ACL) in the knee has had more attention in sports medicine research by far than any other tissue or area, with millions of dollars pumped into research to try reduce the amount of ACL tears occurring in athletes. Sadly the majority of papers have focused on young females participating in football, basketball or athletics. Which isn’t particularly transferable for heavily contact sports largely dominated by men. So contrary to where the money lies, the suggestions I put forward are with the aim to reduce the risk of injury to all tissues and structures around the knee, not just one ligament.

It is my honest opinion that not enough martial arts athletes do a sufficient amount of (or any) strength training, which is surprising considering higher levels of muscular strength and power generally leads to better performance and greater achievements (ref). As well as the fact that higher muscle strength means less load and effort has to go through the smaller tissues of the knee e.g. ligaments and cartilage (ref).

Most people’s first leg muscle group to attack in exercise would be the quads as they are the ones you see in the mirror. The following exercises will strengthen the quads well:

Squats (and all its varieties)

The glutes (bum muscles) are also a popular muscle group to exercise, often targeted through many of the exercises above as well as single leg versions (e.g. single leg squat). What can be neglected are the lateral glutes on the side of the hip which are used not only for hip movement but are also very useful in providing stability to the lower leg. The following are excellent ways to strengthen the lateral glutes:

Side plank or half side plank (with a side leg lift)

The hamstrings (those big muscles at the back of your leg) are the sadly forgotten muscles during workouts, frequently being stretched rather than loaded. As I have mentioned previously in the injury prevention principles, flexibility and stretching has a pretty low effect at reducing injury risk on its own (ref) , it is strengthening that has a much larger effect at reducing injury rates. Having strong supportive hamstrings is also a key component for potentially reducing the risk of developing those pesky ACL tears. The following are top hamstring strengthening exercises:

Finally don’t forget to strengthen those calves with some heavy heel raises.

Or jumping exercises as they are more simply described as, have also been found to be effective at reducing leg injury rates when combined with strengthening work, as well as improving power (ref) . Single leg versions are obviously harder than double leg versions and they can all be done in a variety of directions (forward, backwards, sideways, diagonal etc). The following are a variety of plyometric options:

As well as progressing strength and power, single leg plyometrics are also very effective at improving………….

Which has also been found to reduce injury rates, especially when combined with strength and plyometric work (ref) . Aside from single leg plyometrics various other options can be chucked into stability work to stress the neurological response and processing systems such as;

The stability and plyometric elements can be done before any workout or training session, the strengthening work should be done at least 1-2x a week. Obviously the more the athlete does, the greater the protective effect there will be, if its only done once every 2-3 weeks there will be little protective effect.

These are really the only options available, as I have previously mentioned there is no magic rub/click/stretch/pill/lotion etc that has any effect at reducing injury risk, it is down to the athlete (and coach) to put in the effort.