Here’s How Conor McGregor’s Day Of Eating Looks Like 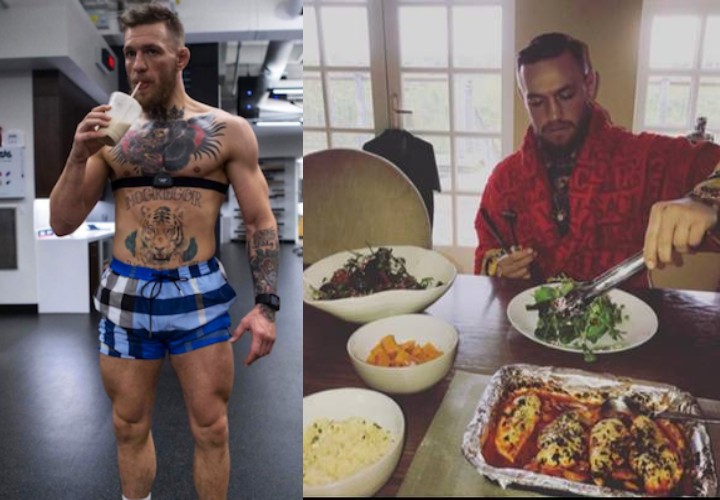 A professional combat athlete’s schedule and regime are nothing short of very strict in all regards, including the diet – where it’s not only important to „eat healthy“, but to be very aware of the quantity of calories and macro nutrients that are taken in on a daily basis.
And how, exactly, does a professional combat athlete’s daily diet look like… Is it really as untasty and bland as you might imagine? Fitness Youtuber, Aseel Soueid, decided to give a shot at (and a taste of) eating like perhaps the most well-known combat athlete of today – like Conor McGregor!

Aseel says that his daily eating experiment has been based on the information about McGregor’s diet plan that he had found online; in this case, it is a plan that consisted out of approximately 2,800 calories, spread out across the course of 6 meals – all meals consisting out of whole foods and without anything processed.

As a pre-lunch meal in this plan, McGregor takes on two containers of strawberry-flavoured Greek yoghurt, combined with a serving of nuts on top – a total of 320 calories!

Making himself a „McGregor lunch“, Aseel goes on to cook a delicious combination of beef with cooked vegetables, some olive oil, a potato, as well as with some cob – all adding up to 989 calories.

For his next, pre-workout meal, Aseel shows that McGregor likes to – quite simply enough – drink a glass of milk, totaling 130 calories.

For his after-training recovery, Aseel takes what Conor does as well – a scoop of whey protein shake, which makes up for a total of around 110 calories.

Finally, for his final meal of the day (and, in his words, the most bland one), Aseel shows that Conor McGregor likes to eat a combination of baked tilapia, mixed vegetables and cooked white rice; all of which round up at 599 calories.

All in all, what are the macros?

Having gone through all of the meals of Conor McGregor’s diet, Aseel calculates the total calorie count – 2,752. In so far as the nutrient macros are considered, there were 234 grams of carbs, 118g of fat, 188g of protein, 33g of fiber and 1,488mg of sodium.

ALRIGHT, COOL… BUT, WHAT’S THE POINT?

So, what’s the conclusion? Aseel says that he was impressed with the fact that Conor McGregor has a lot of flexibility and variability in his diet – which is not only more „fun“ than strict diets are, but also encourages „average people“ to take on their diets with more dedication and zest.

In the end, Aseel points out a great conclusion: that it’s safe to say that Conor McGregor – at least based on the information which were available to him – relies mostly on his diet and his training routine in order to achieve the results he has achieved, both in the octagon and physique-wise.
What’s more, Aseel emphasizes, despite the fact that Conor has an enormous following on his social media, he doesn’t promote nor push the notion of using supplements too much. Taking into regard the reach and influence he has, it’s important to point out that he’s promoting his success as something he got purely out of exercise and diet.

Watch the video below in order to get the full picture of how it looks like to eat like Conor McGregor: