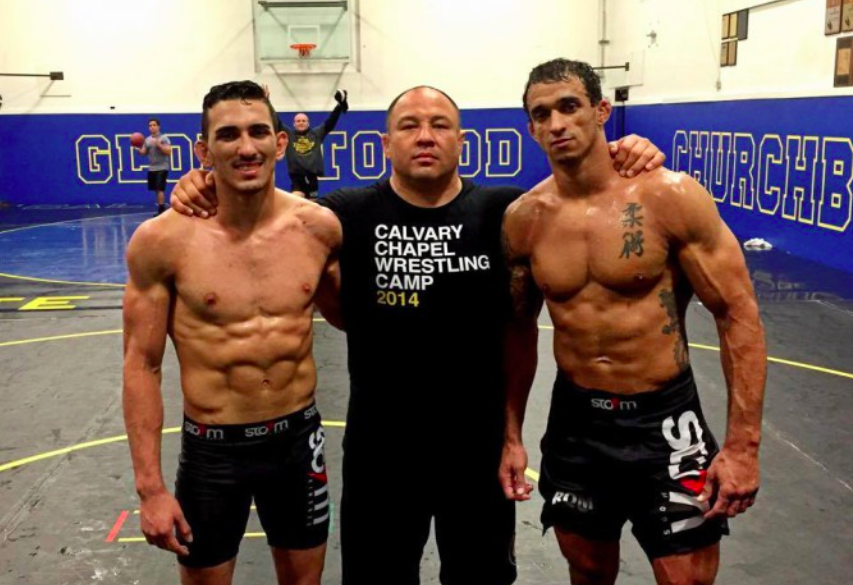 For his last ADCC appearance in 2011 Pablo Popovitch worked with Jeremy Fedoruk – strength and conditioning expert. Among other things they’ve done work on hip extension, knee extension and ankle extension to improve Pablo’s takedown game and the ability to control the opponent. Pablo’s day also included daily bjj and wrestling trainings. Typical routing includes a variety of squats and deadlifts. Particularly interesting is a routine of deadlifting the Olympic weightlifting bar with no weights but with jumping on every 5th repeat. In the video attached below he also power slams battle rope and does inward and outward rotations of it. He also keeps his own diet to help speed up recovery – the Popovitch diet. Height: 1.74 m (5′ 9″) Weight: Meio Pesado (88 kg – 194lbs)   Andre Galvao is one of the greatest competitors in bjj maybe ever. He has 3x World Championships, 8xPan American Championships and 2xADCC wins under his belt. His instagram features some impressive bench presses. https://www.instagram.com/p/BEENb5JCtjY/?taken-by=galvaobjj In the comment section he confirms the weight in question to be 365 lbs (or 165.5kg). In an interview in 2014 he said he couldn’t begin to understand the athletes who still indulge in coke, hamburgers and similar guilty pleasures. You can view his circuit training for the ADCC on //www.bjjee.com/strength-conditioning/andre-galvaos-pre-adcc-circuit-training/ Height: 1.72 m (5′ 8″) Weight: He recently fought Tonon at 83kg but he’s been known to walk close to 90 frequently. However the UFC still lists his weight at 77kg (or 170 lbs).   Rousimar Palhares’s monster physique is a source for bafflement. The little tree stump (“toquinho” in Portuguese) claims he works out 13 times a week. 3 times strength and conditioning training and the rest is dedicated to sparring. One rare video of him in the gym documents his 300kg leg lifts as well as benching what looks like 188.2 kg or (415 lbs). Possibly the greatest ever champion in the ADCC. He has never had a single point scored on him in the ADCC. Ricardo Arona always showed up in tremendous shape for his competitions and fights. He is built like a bodybuilder.

He dedicated a lot of time developing ways to improve his strength and conditioning. For this, he says he likes to train with nature, having developed a set of exercises from walking against sea’s current to develop balance, running up hills on a beach for stamina and doing extreme manoeuvres while surfing in the beach of Itacoatira to test his adrenaline dump. Back in 2015 Gabi Garcia said she could make 198 pounds for her mma debut. Without a doubt her weight loss is followed with a killer strength and cardio routine. While her form leaves much to be desired, the weights she lifts are monstrous – much like Gabi:

We’ve confirmed she practices crossfit at a variety of locations and is a known user of the elevation training mask. Kron Gracie likes to mix it up. Besides teaching he’s a fan of the outdoor work outs. He swims in the ocean, jogs, rides a bike or swims. His warm ups typically consist of about 100 pull-ups and dips. Young prodigy of the Gracie clan claims to barely ever lift weights. Instead he focuses on push-ups, pull-ups and jiu-jitsu. You can find out more about Kron’s regimen if you click here. Unlike many of the above mentioned, Rafael Mendes advocates doing no less than15 three minute rounds without rest in-between. He believes that short rounds make the match more equal even against lower ranked opponents. To goal is to be fast and powerful to win. He insists he doesn’t really believe in pumping iron. Sometimes he does 6 or 8 10 minute rounds without rest. The goal is to reach the submission without rest so he can keep moving. He insists this type of training increases endurance. In spite of everything he says, watching his circuit training for the ADCC leaves no doubt – he is a beast on his own.

Back in 2006, after finding out she was expecting Angelica Galvao hung up the belt for a while. In spite of giving up bjj for the time she was still doing daily dead lifting. That’s how fat her commitment goes. Back in 2011 she returned to the competitive circuit and won Worlds straight away. For the Galvaos gym time equals family time. She’s equally committed as Andre to achieving maximum athleticism and she’s got the body to show for it! Rodolfo Viera believes in hard work. He dedicates Mondays, Wednesdays and Fridays to conditioning on the mats. He often does specific exercises and cardio in the morning. In the afternoon he typically trains bjj at GFTeam. But twice a weak he focuses on lifting weights. On weightlifting days he practices positions in the afternoon class as opposed to regular training. These are the days you could catch him and have a lighter sparring session. There’s no question, he puts in hard work and thinks through every aspect. Gregor Gracie upholds the family tradition of cross-training. Over the years he even participated in several wrestling exhibition matches. The instructor at Renzo Gracie academy claims his preparations for MMA fights are 100% focused on his opponents characteristics. Much like his cousin Kron, during down time you might catch him skating. If you follow his social media you might also see him working on his calisthenics and cardio. Unlike the average bjj player Gregor also has the access to a hyperbaric oxygen chamber. Rômulo Barral is a black belt under Vinicius Magalhaes and competes for Gracie Barra, where he has won numerous championships. Rômulo Barral is one of the top Brazilian Jiu Jitsu fighters in the “Meio Pesado” weight division. Rômulo Barral maintained this black belt status in the years that followed with consistent medals at the top BJJ tournaments in the world. In August, 2011, Rômulo established his own Gracie Barra academy in Northridge, California, proving that he is also a coach. Rômulo is a 5-time black belt world champion, 3-time silver medalist in the open weight division, and a NO GI world champion, and the 2013 ADCC champion.

In the post, Leo talks about why Romulo WILL reach all of his goals. Check it out:

“Today was another amazing day. It was another reason why I absolutely love my job and it was confirmed again that what I preach works. Romulo, after years of training, you’ve reached a limit most athletes don’t know exist. I’ve been coaching you for a while and I can proudly tell you that your mental and physical state have established an alliance that very few are able to achieve. You experienced how your desire fuels your drive. You acknowledged your will power becoming your weapon. This is the day when your purpose became your religion and your Dream became your God. Today was the perfect example of what it takes to achieve your goal. You need to worship it. You need to believe in it. You need to feel it running through your veins. You need to become one with your dream, as if, life wouldn’t matter without.
My friend, welcome to the NEXT LEVEL.”