Andre Galvao’s Plyometric Workout Will Improve Your Explosiveness And Cardio 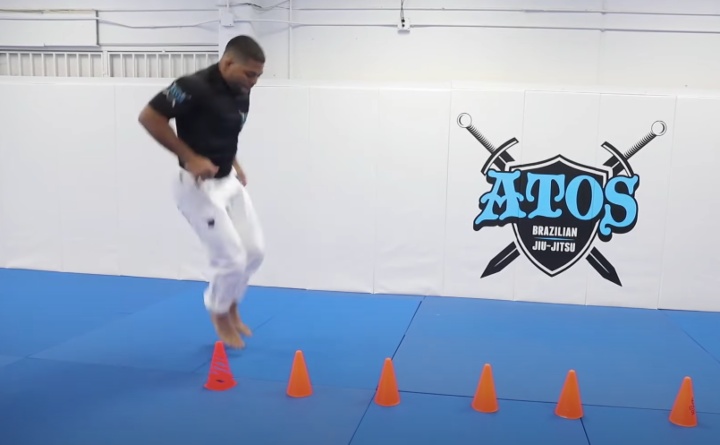 Plyometric training is one of the best ways to improve your cardio and explosiveness for Brazilian Jiu Jitsu. An additional bonus to it is that you don’t need a lot of equipment to have a good workout in – but just a few basic things, if that!
And if there is one person you should listen to in regards to becoming a more explosive Jiujiteiro, than that’s Andre Galvao. This time, he has prepared a great plyometric workout; one that will both leave you in a puddle of sweat and that won’t take a lot of your time.

After he warmed up, Andre has placed 7 cones one after another, with a distance between them at around a foot’s length for his first workout. You don’t have to use cones, of course; Andre explains that you can use other things, such as water bottles. He also emphasizes that you don’t have to limit yourself to 7 cones – you can go as high as 20 in number, but there isn’t any sense in going higher than that.
Having set this up, Andre demonstrates that you simply need to jump over each cone, doing so while attempting to lift your knees as high to your chest as possible. Do this for a count of around 3 to 4 sets.

SIDE TO SIDE AND BACKWARD JUMPS

The next exercise uses the same cone setup, and you’ll be jumping over these cones yet again! However, you’ll do it a bit differently now; instead of jumping straight forward, you will be doing it from side to side, over every cone.
After you’re done with that, switch the direction and execute the side to side backward jumps; these will not challenge just your endurance and explosive power, but your coordination as well. Do 4 sets of 20 to 40 jumps for both exercises.

SIDE TO SIDE HIGH JUMPS

Now you’ll transfer the identical side-to-side jumping principle to the next exercise, but you’ll do it over only one cone. What’s more, as Andre shows, you will increase the difficulty of this exercise by finding something bigger to jump over; such as a chair that reaches to your thigh muscle. Just make sure that you are well-focused as you execute this one, as you could get injured if you trip over the object you’re using.
Andre recommends doing 2 sets of 20 jumps, with 30 seconds to one minute of rest between sets, before moving on to the next exercise.

The forward jump is an exercise you can probably remember doing in your high school PE class. For the sake of gauging distance, take a long step and place the second cone where your foot lands. This is the length you will have to cover with each forward jump; execute it for a total of 2 sets and 10 to 15 repetitions, with a rest of 2 to 3 minutes in-between.
Also, Andre emphasizes that you should be careful when choosing the surface you’ll do this exercise on – make sure that it’s a sturdy, not a slippery one.

The final plyometric exercise you will do are the „gorilla jumps“. Andre demonstrates: simply jump up as high as you can, while you lift your knees high towards your shoulders and as you keep your arms between your legs.
Make sure to put in the extra effort on this one, jumping as high as you can and as fast as you can – doing so for the count of 2×10 reps. Also, try to land softly on the ground. Don’t let your feet strike the mats at full force, but land with control.

Watch Andre demonstrate his workout below: