High Percentage Single Leg Takedown That Anybody Can Do 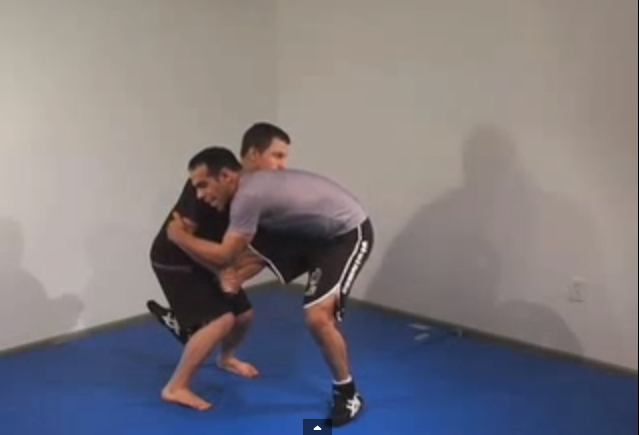 As we all know, the single leg is one of the most basic and high percentage takedowns

in jiu jitsu. Whether youʼre standing on the ground, you need to incorporate the single

leg takedown into your game – but just as importantly, you need to know how to

DEFEND it as well. In fact, you should feel just as comfortable GETTING single legged

as you do when you are taking someone down.

In this video, BJJ black belt and Div 1 Wrestler Ken Primola will explain the basic principles of the single leg takedown

defense. Letʼs watch the video, and then weʼll dissect each element of the defense. 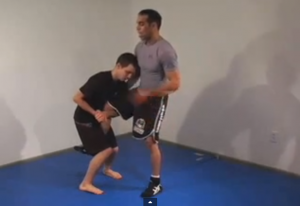 Letʼs be honest, this position can suck if you donʼt know what to do. In the picture below,

Kenʼs opponent has his leg snatched up. His head is driving into his front deltoid region,

and his hands are clasped together with Kenʼs knee against his chest. This creates

substantial pressure driving forward, which will corrupt Kenʼs balance if he doesnʼt react

quickly. As you can see, all of Kenʼs weight gets distributed to his left leg. 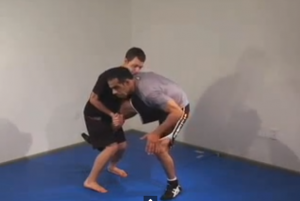 If Ken doesnʼt make a connection with his opponent, he will continue to be driven

backwards on his left leg. What he does next is a pivotal point in this single leg takedown

defense. Ken establishes a grip on his opponent, but not just any grip. He cups right behind his

opponentʼs nearside shoulder, right in his armpit. This grip can keep Ken connected to

his opponent, but more importantly it can redirect his pressure. Whenever you are

executing a single leg takedown, your objective it to drive forward. This grip can slightly

elevate Kenʼs opponent, giving him the levrage he needs to lower his base. 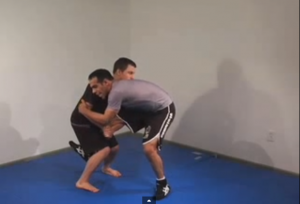 pressure against your opponentʼs shoulder region. This pevents a lot of the potential

By cupping the far side shoulder, Ken is able to create the space needed to lower his

level. Notice how Ken moves his ENTIRE BODY around to the opposite side shoulder

of the leg being attacked. This completely changes the angle, and dislodges the

pressure on his own shoulder. At this point, Ken has alleviated a lot of his opponentʼs

However, he is still NOT in a good place. To impede the rest of the pressure coming

forward, Ken simply takes his shoulder and drives it into his opponentʼs neck. Then, he

cups his right tricep muscle with his left hand. Even though Kenʼs leg is still snatch up,

his base is much lower and he is controlling his opponentʼs posture.

The “Kick Down/Push Up” Finish 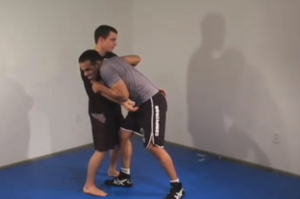 By keeping his shoulder in his opponentʼs neck, it gives him the necessary counter

pressure to kick DOWN with the leg being attacked. If for any reason Ken feels like he

does not have the proper angle to do so, he can simply readjust the angle by stepping

back with his left leg. The shoulder in the neck isolates his opponentʼs upper body, while

the kick forces the gable grip to become dislodged – remember, the power of your legs

and hips are stronger than your arms.

look to take his opponent down.