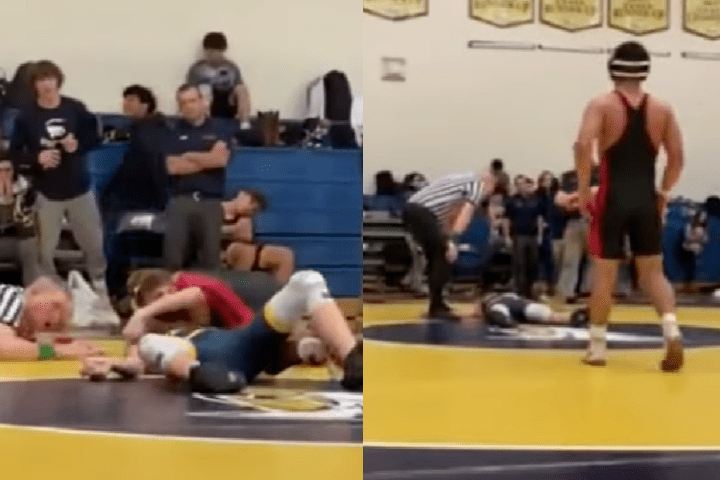 When it comes to chokes, there are no tough guys – everyone falls a sleep when it’s properly applied. It doesn’t matter if it’s a Rear Naked Choke (which is, truth be told, the King of all chokes), a Guillotine Choke, a Darce Choke, or whichever other strangle submission you can think of.
For example, take a look at a wrestling match below. It appears to be a high school match, where one of the athletes is close to pinning his opponent. However, the way he’s aiming to do so is quite unusual – he is using the Anaconda Choke!

Eventually, it appears that the ref gives him the pin. But, as the wrestler lets go of the Anaconda Choke, it seems that his opponent was asleep for quite some time already; slumping back on the mats.
Take a look at the video below to see how it happened. Among other things, it shows that wrestling referees – especially those for younger athletes – need more training and education in order to notice “going to sleep” and behaving adequately from there.

Being stuck in an Anaconda Choke sure sucks – getting caught in a tight choke is no fun and you can often feel that your time for tapping is quickly running out.
Here’s one way of escaping a fully locked-in Anaconda, as explained by ZombieProof‘s Kent Peters: