[Watch] MMA Fighter Goes For A Kneebar – Taps Himself Out 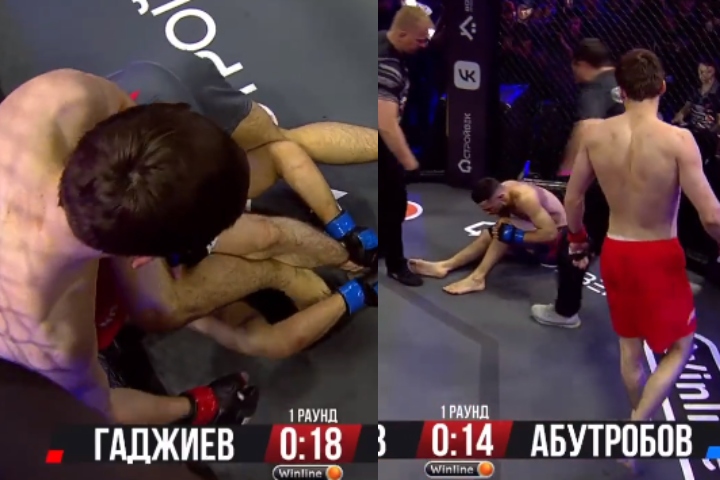 Ever been in a situation where you tapped yourself out? If you’ve been training for long enough, at one point in time you probably did end up in that sort of a situation – and it was most certainly a weird one, to say the least.
Well, that’s exactly what happened at a recent MMA fight that was organized by a Russian “Arena” promotion. One of the fighters went for a Kneebar… And tapped himself out.

Namely, it was a fight between Magomed Gadzhiev and Muyasar Abutrobov. It was Abutrobov who started out with pressure, landing some heavy strikes from the very beginning. He then caught a kick and went for a Single Leg takedown; but Gadzhiev established a clinch and tripped his opponent down to the mats.
Then the athletes stood back up and continued to fight in the clinch. Abutrobov went for another takedown, but was caught in a Guillotine Choke; it seemed like he was in trouble, but he managed to use a sneaky duck under – and pinned Gadzhiev to the cage, landing knees on his opponent.

But that’s when the unexpected happened. Abutrobov went for a rolling Kneebar and, in a strange turn of events, injured himself in the process.
He tapped out and lost the match: