UFC Referee Marc Goddard Teaches Grappling: “He’s The First On The Mats, Last One Off” 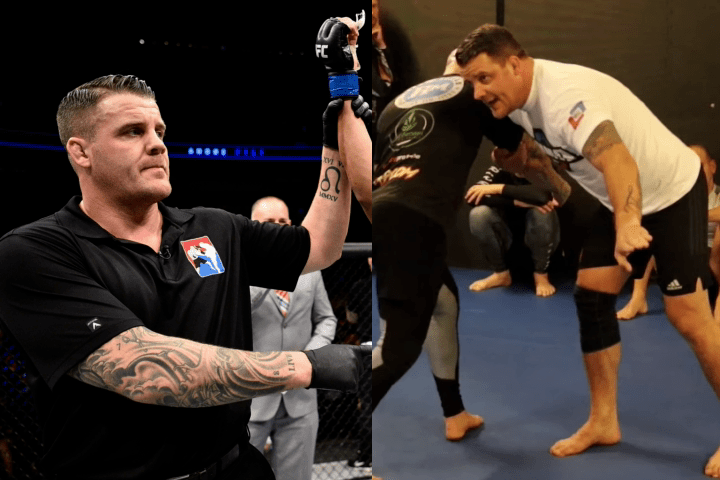 Marc Goddard is one of the world’s top-ranking MMA referees, currently in the UFC where he kept a keen eye on a number of title fights in the last few years. However, what a lot of people don’t know about Goddard is that he was once a fighter himself! In between making his professional debut in 2002 and 2008, when he retired, he accrued a 7-6-1 record.
But here’s yet another catch… This British UFC referee is also a fierce grappler.

One of the visitors of the Reddit platform had this to say about Marc:

Marc literally (and I’m not exaggerating, rolls with everyone on the road at shows), despite being well in his 40s, rolls with anyone willing. He rolled plenty after this seminar to and currently teaches and rolls at GB Halesowen.

First on the mats, last one off. When I travel and get to train he’s always there and rolling with everyone. And I concur, he’s an absolute nightmare!

While another one explained that, what to some may seem to be a string of quick promotions given to Marc… Isn’t really so:

This has been brought up before – but I believe he started BJJ in the early 2000s.
As is often the case with these figures, they don’t really have a home gym and train anywhere they can, before settling back down where they started. What you then see is a string of what look like quick promotions, but it’s more a case of the instructor catching them up to where they should be.

I expect he’ll be sh*t hot because he’s travelled the world and likely trained with a ton of people we aren’t even aware of.

Check out Marc Goddard demonstrating his grappling prowess and the Arm Drag below: