Pull Guard Straight Into A Triangle With Andre Galvao 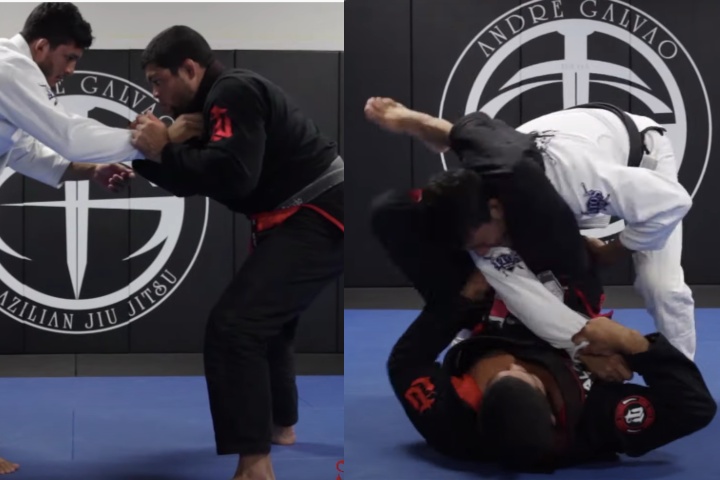 The Gi offers so many opportunities and possibilities for your BJJ game! You can be really creative and go for the most complex of lapel combinations, for example, which will not only confuse your opponents (and, sometimes, even spectators) – but lead to cool submissions as well. It’s so much fun! But, fun and creativity in the Gi don’t have to be restricted only to the complex things, of course. You can go for really „simple“ setups and still gain plenty of success nevertheless.
One of those, more simple setups, is the Guard Pull to Triangle Choke. Let’s see it done and explained by Andre Galvao.

NO, GUARD PULLING IS NOT FOR COWARDS

But yeah yeah, we know what you’re probably thinking of right now; isn’t guard pulling a cowardly thing to do? Is it not, like, a way to run away from the takedown game – into something which doesn’t require as much knowledge and courage?
Listen. There are no „good“ nor „bad“ techniques and setups in Brazilian Jiu Jitsu, there are only those which work and don’t work. Sure, some tournaments may forbid certain techniques for a given belt level or altogether, but this doesn’t have to mean those techniques are bad. The reasons they’re banned can be multiple, but mostly circulate around the fact that they can injure more easily than other techniques can… But they work.

And this is precisely the logic which you should, by all means, follow on your BJJ path. No, not that you should do a technique at a tournament it’s forbidden at – we don’t want to see you disqualified. What we mean is that you should gauge techniques only by how effective they are. That’s it! If the technique is high percentage and, equally important, if it suits your style and body type well… There’s not much else to it. You should drill it and use it as soon as possible.
In other words, just as there are no bad techniques, there are no cowardly ones! Sure, some techniques require more technical finesse and strength than others do – such as in the case of the Guard Pull vs Takedown comparison – but that doesn’t mean some are less manly than others. If they work and if you like them, do them.

So, the next time you’re thinking whether or not you should do a Guard Pull, ask yourself not if it’s a cowardly thing to do; but if it is the right move for the situation you’re in.
Let’s now see how to do it so as to get a Triangle.

The moment his training partner grabs the collar, Andre breaks this grip with both of his hands. Then, he drags that arm and grips the partner’s sleeve just under the armpit. He pulls on it lightly, which is necessary for a subsequently successful Triangle entry.
From here, Andre explains and shows that he’ll place his foot – of the leg which is on the same side as his sleeve grips – onto the partner’s hip; simultaneously going down to the floor and laying down sideways. Pay attention that he keeps his foot posted on the hip, even when he’s already fallen down.

Here, his training partner tries to take Andre’s foot off of the hip. Andre, in turn, uses that as a great moment to turn into the partner, lift his hips off the mat and shoot his leg up!
Make sure to press your calf muscle against the opponent’s neck here. Then, grab your shin to correct the position and lock in the Triangle!

Watch Andre demonstrate this setup below: 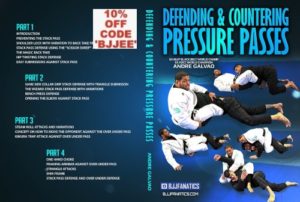