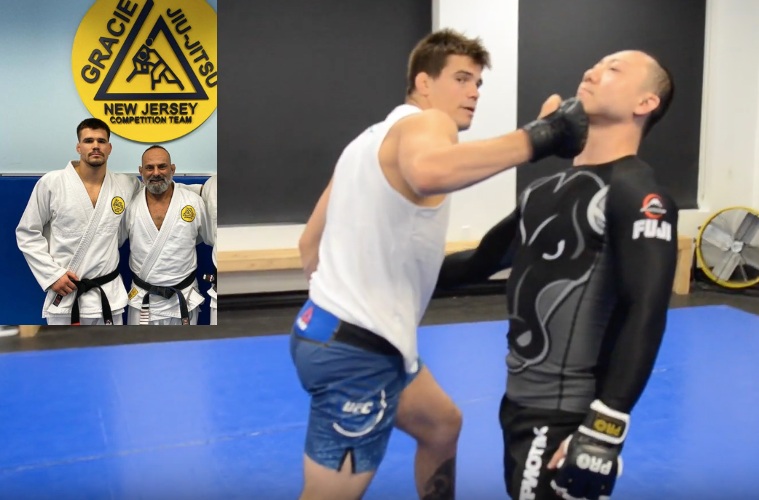 There is a lot of things that jiujiteiros could learn from wrestlers, judokas and other predominantly stand-up fighters. And no, it’s not just about how to throw somebody in the air and slam them down; but it’s about the fact that not everything has to be complicated in order to work as well.
Simplicity wins, more often than not! Among other situations, this is also true for when your opponent gets an underhook on you, when both of you are fighting for a takedown.

Mickey Gall, a welterweight division Ultimate Fighting Championship (UFC) fighter, shows how you can defend against the underhook – and then use it to your advantage – with an old school technique, called the „Gracie Shoulder Rip“.

MAKE DISTANCE AND WEAKEN THEIR UNDERHOOK

Mickey shows that, as his training partner Ben Zhuang shoots a deep underhook, he first needs to use his head in order to keep Ben at an initial distance. The way Mickey does this is by placing the top of his head under Ben’s neck and shoulder; on the same side that Ben has dug his underhook in.
Then, Mickey needs to make the distance between himself and Ben even bigger. To do that, he simply places his hands onto Ben’s hips. He pushes them away in order to elongate Ben’s underhook.

Once you have established distance and weakened your opponent’s underhook by elongating it, it’s time to use it against them.

In order to start with his defend-and-attack manoeuvre, Mickey clasps his hands in a cable grip manner underneath Ben’s underhook arm. Having established a strong grip, he starts twisting Ben’s arm to the side. What this does, Mickey explains, is that it puts his training partner’s arm into a sort of an Americana hold; it is a very nasty position, one which places a lot of tension on Ben’s shoulder muscle and ligaments.

Taking that into account, Mickey explains that what he would do in an actual match is step back with his rear leg, rotate his hips and twist his opponent’s arm as he pulls it with full force! Needless to say that there is a very high possibility that this, alone, would seriously hurt anyone on the opposing side. Because of that, naturally, Mickey doesn’t do it with full force on his training partner; but just gently pulls and twists his arm to the side. Even this is enough for Ben to feel quite uncomfortable.

YOU ALSO HAVE A GREAT PUNCHING OPPORTUNITY!

In order to get the full effect of this setup in action and to punish his opponent for getting an underhook on him, Mickey says that in an MMA match he would turn it into a punch.

Basically, after he has created distance and elongated his training partner’s underhook by first using his head and then by pushing his hips away, Mickey will pull and twist not just in order to inflict tremendous torque on Ben’s shoulder; but in order to get him to step forward as well. As Ben steps forward he, well, stepped right into a position for Mickey to throw a big haymaker to his face.
Sure, punching your opponent is a big no-no if you are in a Brazilian Jiu Jitsu match; but you can still use the Gracie Shoulder Rip to make them sorry for ever getting that underhook!

Watch Mickey Gall explain and demonstrate this technique on the video below: