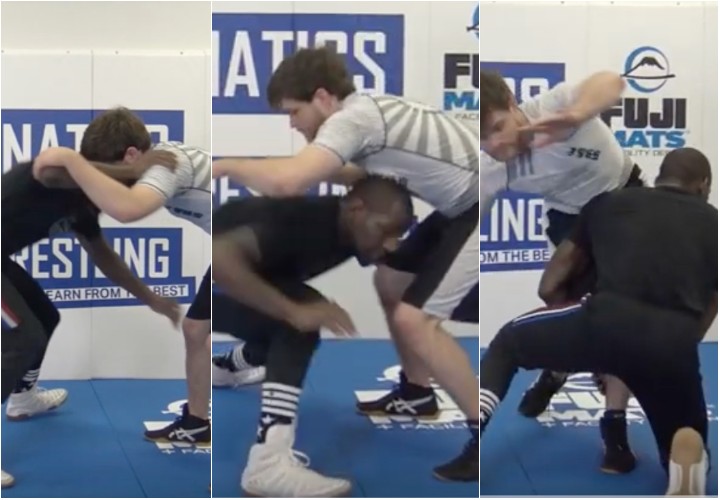 To start practicing this Art, there’s no better way to do so than with the misdirection double leg. Read on how to do that in two easy steps below, taken from an Scientific shots instructional by the 4-time All American and 4-time Big Ten champion, Ed Ruth.

First things first: if you want something to work, you have to commit to it fully. That is what coach Ruth points out immediately – you have to sell the feint.
Instead of doing it haphazardly, he emphasizes that you need to really go for it. Make the opponent believe that you are shooting for the leg that you’re feinting to, so that he can do nothing else but instinctively pull that leg back.

But how to do that exactly? Pay attention that you first need to have an inside tie position with your arms, as the outside tie would be too easily defended by your opponent. Then, drop your level and reach for his leg. Try to touch it; he needs to be afraid and on his tippy toes the whole time.
By doing so, you have a surefire way to make him react and pull it back.

And here’s the beauty to it – even if your opponent is a more experienced one and doesn’t put the leg back because of your feint, he will still be hesitant. Even then, you have granted yourself an opportunity to go for the other leg; the one which you’ve been aiming for all along.

Reach across the body for the other leg

Because of his hesitation, as well as because you’re going to shoot across to his other side and leg, coach Ruth points out that your opponent is now incapable of sprawling effectively.

For, in simple terms, he can now only sprawl on the shoulder of your inside arm – the one which you place first for the takedown.
And now you can finish the technique: after reaching across to the other side of his body, make the connection with your outside arm to take him down with a „regular“ double leg.