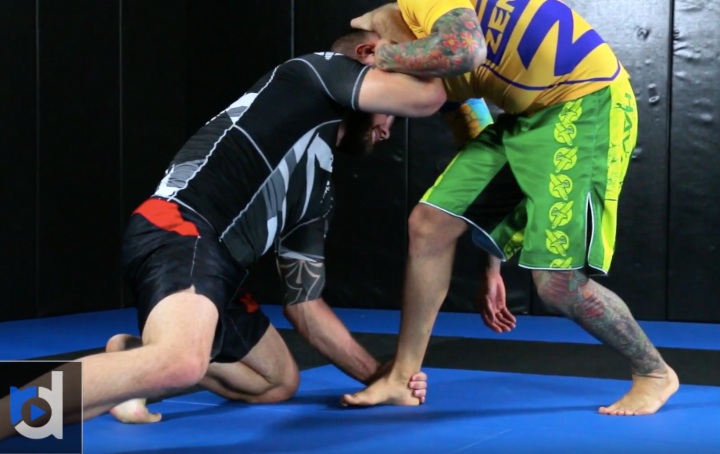 The Ankle Pick is such a great takedown for jiujiteiros – even though it does (as all techniques do, truth be told) require a bit of practice and repetition in order to pull it off more consistently than not, it’s not a complex technique. However, it’s still very important to cover the basics that make it work.
Robert Drysdale, a BJJ black belt under Leonardo Vieira and the ADCC and IBJJF World Champion, explains the nuances behind this takedown.

First of all, sure. Some Jiu Jitsu practitioners might me worried that the Ankle Pick could leave them exposed to being caught in an Armbar by their opponents, which ends up being a reason for them not to try to do this move at all. However, Robert says that this shouldn’t be a worry, for as long as you finish the takedown standing – with both of your knees off the mats and with the best-possible upright position – as well as if you let go of your opponent’s neck as soon as you get the takedown, then there’s no risk. That is unless, of course, your opponent gets the timing just right (that is, if they get it down perfectly) and manages to pull off a Flying Armbar… Which is, as you might’ve guessed, extremely unlikely to happen.

Now that he has cleared that fear out of the equation, Robert moves on to explain the actual Ankle Pick technique.

Why wrist control? Well, it’s there to help you get the leg that you’re aiming for! By pulling your opponent’s wrist towards you and by simultaneously stepping back, they will step forward with their leg, one that is on the same side as the arm you’re pulling!
Once that leg steps forward, Robert points out that you need to let go off their wrist and change your level. As you do so, keep cuffing the back of your opponent’s head and pull it down with you, towards their foot.

Now, as you pull their head down, you’ll use your other hand to grab your opponent’s ankle. Not their hamstring, not their calf muscle; but their ankle, at the heel. In order to do so, you might need to place your knee to the mat; but if you can manage to perform the technique without your knee hitting the floor, then no problem – do it like that, Robert advises.

To get the takedown from there, what Robert does is that he stands up. As he stands up, he brings his training partner’s ankle off of the ground and pushes his head to the ground to finish the Ankle Pick.

Now, the way he pushes his training partner’s head down is not as straightforward as it might seem. Robert emphasizes that you first need to make sure that you stay heavy on your opponent’s neck at all times. Secondly, when you pick their ankle up, you do so in one direction – while pushing their head away from yourself in another direction and in a sort of a „clubbing“ motion, both of which make up for a combination that resembles the turning of a wheel.

Great takedown technique, isn’t it? Watch Robert explain it in amazing detail on the video below.