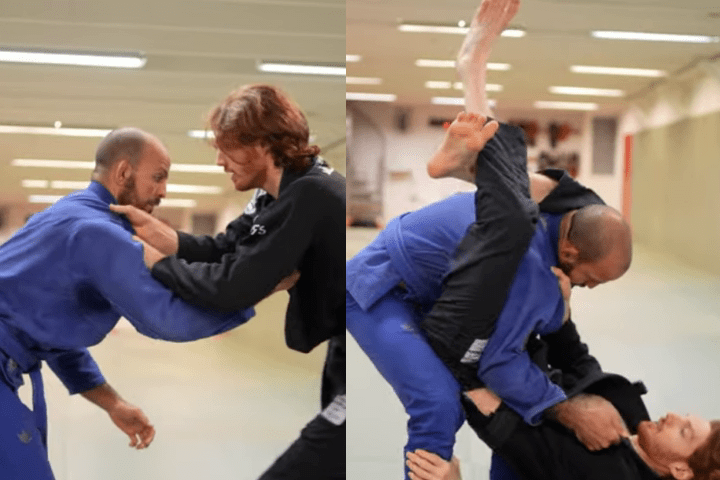 Triangle Choke? Triangle Choke! Everyone loves it and wants to get better at setting it up. (Unless you have really short legs… Sorry about that.)
And how many Triangle setups do you know? You probably know the basic one from Closed Guard or even the one from Mount. But you need to know more of them!

The first setup that you should know is the Flying Triangle Choke. Yes, indeed! Even though it may seem fancy, if you invest time into practicing it, you’ll be surprised by how often you’ll be successful with it; and that’s because your opponents won’t see it coming.
When you’re attacking someone from Closed Guard, for example, they’ll keep their elbows tight. When standing, however, they’ll often overextend their arms – which is ripe opportunity for Flying Triangles.

Next up is the Double Sleeve (Lasso) Triangle. Felipe Andrew used this one quite a bit, even in a No Gi match! It’s a variation that is quite difficult for your opponent to see coming… So start training it!
The Overhook Triangle from Closed Guard is a submission which is seen all the way from white to the elite black belt levels. It’s extremely effective because you can isolate the person’s arm – without which they’re helpless.

And finally, you need to learn how to set up a Triangle from Top Side Control. You know how your opponent keeps their arms and elbows tight when in this position? That means that you’ll have a difficult time getting your Armbars… But a much easier time pinning their wrist to their chest and, therefore, earning your Triangle!
Check out this, as well as other setups, on the video below: