How A World Class Grappler Used Wrestling To Take The BJJ World By Storm! 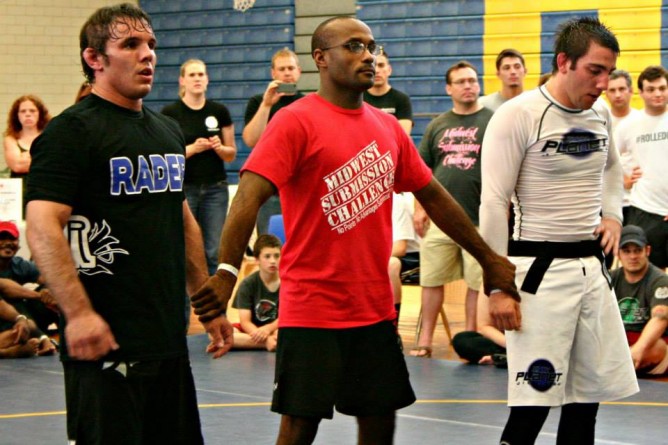 In a world where we can look at Mixed Martial Arts and clump every discipline into the same general category—if you box or are a Thai fighter, you strike, if you wrestle you’re a grappler, etc.—it’s easy to overlook the subtleties of what truly makes each art form great and unique.

Recently, I was able to sit down and pick the brain of Justin Rader.  A fantastic grappler, and truly world class, Justin wasn’t some kind of BJJ wonder kin at birth, in fact, Brazilian Jiu Jitsu wasn’t always Justin’s grappling art of choice. You can check out the actual interview in the video below

Prior to becoming known as a lethal submission artist, Justin spent years dominating the wrestling world and becoming influenced by its make-or-break attitude.

During our talk, Justin and I delved into the what separates—and conjoins—the worlds of wrestling and Brazilian Jiu Jitsu and how the transition actually hurt Rader in his quest to make waves in the BJJ universe.

The Different Cultures Between The Grappling Art Forms

As I stated earlier, it’s easy for casual  fans to view BJJ & wrestlers as one in the same: athletes that look to grapple and to create a chess match on the ground.  However, this couldn’t be further from the truth!

As someone who runs his own BJJ academy, I always pride my gym on a very friendly, team atmosphere.  This was something that Rader said is denounced in the wrestling world, and it’s quite the opposite!

Referring to the kill-or-be-killed mentality a wrestler is trained to have, Justin said his mentality heading into practices was quite simple, “I need to beat down all of my partners so they know their place.”

Rader notes the intense battles that occur for positioning on the roster.  Every day is a heated battle for each weight class, with only one person being eligible to obtain that position, and it forces you to be dog-like while on the mat.

“They thought I was a jerk.”

Those were the words that Justin used to first describe his transition from wrestling to BJJ.  With the pit-bull mentality firmly rooted in his mind, Rader acted in a polarizing manner early on his BJJ career.

“I used to do horrible, not classy stuff,” Rader admitted.  He recalls stories of taunting the crowds during a match, trash talking his opponent and being very immature.

Once he realized he was painting a target on his back, Rader saw he needed to humble himself and strip himself of the dog-eat-dog approach.

Before long, Justin saw himself become one of the most established, promising names in the sport of Brazilian Jiu Jitsu and has used his wrestling background to his advantage.

With a powering, bully-esque approach to BJJ, Justin provides a tough code to crack, and this has helped him garner many elite accolades.

Wrestling or Brazilian Jiu Jitsu, it doesn’t matter how you cut it…Justin Rader is a dangerous man. Justin just released a sick course! Check the full review of the course here and the actual course itself here!