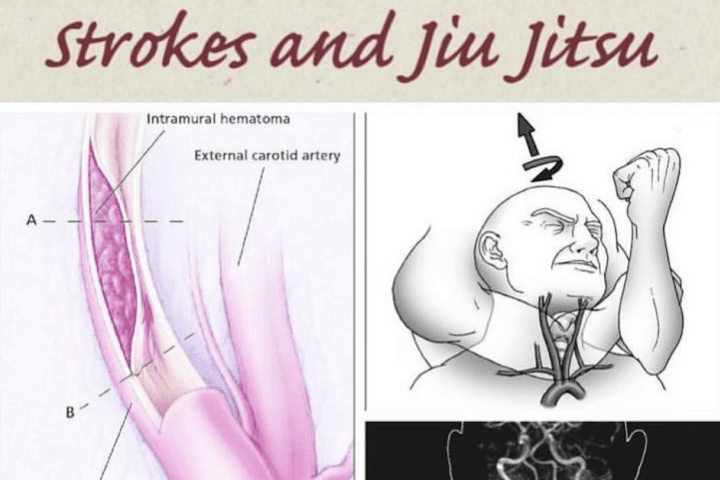 Chris Martin is a Brazilian Jiu-Jitsu practitioner. He experienced a stroke in 2017 due to a vascular neck injury, that was caused by strangulation – in other words, by a BJJ choke.
Since then, it is his mission to “spread awareness to the BJJ community surrounding the potential damage to the carotid and vertebral arteries often caused through BJJ training and competition.”

THE WARNING SIGNS OF VASCULAR NECK INJURIES & STROKE IN BJJ

In his recent Medium post, he explained the seriousness of being on the receiving end of a BJJ-induced stroke:

Most believe that strokes caused by strangulation during jiu-jitsu participation are exceedingly rare and nothing with which participants should concern themselves. After all, they have enough to worry about regarding the eminent damage to the outside of their bodies to focus on when they are fighting and training. However, this line of thinking could cause participants in Brazilian jiu-jitsu to delay their all-important reaction time if and when the signs and symptoms of neck, or vascular injuries present.

Strokes don’t just take hobbyist and professional fighters out of the game for a few days or a few weeks so their bodies can heal. If a jiu-jitsu-related stroke occurs, that fighter’s life and the lives of those around him (or her) are forever changed. A stroke is not an injury that one can simply “walk off.” The neurological damage that can occur ranges from partial blindness to loss of motor skills, and it can even cause death.

Therefore, Martin emphasizes, both professional and hobby-oriented Jiu-Jitsu practitioners need to learn the early and late-stage warning signs.
There are two types of vascular neck injuries that could happen due to BJJ chokes. These are the vertebral and carotid artery dissection, and they both have different signs and symptoms.

Martin explains that, to better understand and ascertain these symptoms in patients, it is crucial to memorize the acronym FASTER:

Make sure to read Martin’s entire blog post here. Also, listen to his endearing conversation with a BJJ practitioner who recognized the early signs: