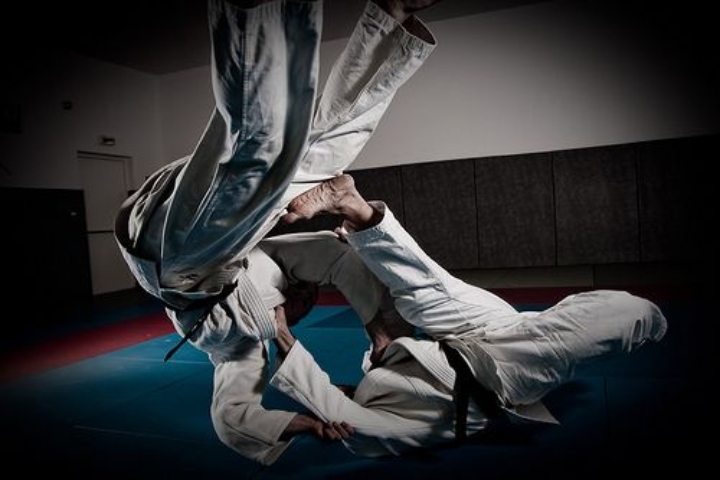 Hey… We get it. Judo throws have never been your “thing” when it comes to BJJ. You’ve never felt comfortable with using them when you roll. Plus, when you face someone whose grips send the: “Yes, I’m a Judoka” message, your palms get quite sweaty.

But just because your Judo throws suck now doesn’t mean that they have to suck forever. And wouldn’t it be amazing if you could become as confident in your standup as you’re in your ground game?
Here’s how to do it: focus on learning and perfecting just one high-percentage move. For example, the Yoko Tomoe Nage, as taught by the 2x Judo Olympian Nick Delpopolo.

YOKO TOMOE NAGE – WHY LEARN IT?

Okay, okay. We see the look of bewilderment on your face, asking: “But why Yoko Tomoe Nage? Shouldn’t I learn some other, easier technique?”
Well, here’s the deal. There are other gi-based throws that you could learn… But none of them can come close to the simplicity and effectiveness combination of the Yoko Tomoe Nage.

It won’t take you such a long time (as it is the case with other throws) to become superb in using it. And, as soon as you become borderline good at it, you’ll notice how easy it is to throw your opponents.
With that said, the Yoko Tomoe Nage is great for BJJ athletes also because it enables you to immediately transition into Mount. It’s also safer than the other throws are – even if you fail at it, you’ll still have your grips and your Open Guard.

ARE YOU GETTING THE DETAILS RIGHT?

But let’s face it. Yoko Tomoe Nage isn’t easy to execute: there are many details that you need to get right. What’s more, a lot of the specifics that make the difference between an excellent Yoko Tomoe Nage and a merely “good” one, you won’t be able to learn from your instructor.
That’s simply because these details are reserved for those athletes and coaches who have truly excelled in this throw – such as Nick Delpopolo.

Nick is a 2x U.S. Olympian and a 11x World Team Member for USA Judo. Widely known as a Judoka with one of the biggest arsenals of Judo throws in the world, he has been travelling the United States for over 15 years; coaching and giving seminars to numerous athletes, helping them succeed both nationally and internationally across Judo, Wrestling, and Brazilian Jiu-Jitsu stages.

Yup, you’ve read that right. Nick rolls as well and is BJJ blue belt who enjoys competing. Here’s what he has to say about BJJ athletes and Judo:

I’ve seen how difficult it can be for them [Jiu-Jitsu athletes] to use Judo throws properly. Which is why I enjoy coaching them so much.
You just need to give them a sense of direction, explain what makes or breaks a throw, demonstrate a couple of simple details – and bam! They’re good to go.

It’s exactly due to this love for both Judo and Brazilian Jiu-Jitsu that Nick decided to create the world’s most comprehensive Yoko Tomoe Nage instructional.

The instructional is geared for both beginners and more advanced athletes alike, as Nick takes pride in communicating his points clearly and effectively to anyone who wants to become better in throws. Here’s what BigJudo.com had to say about it:

Nick created this instructional so that users could feel like they are in a private lesson with an Olympic athlete; and to also have the ability to re-watch each section over and over again, to zero in on every detail needed to master Yoko Tomoe Nage.

So, if you want to become more confident in your throws, then it’s high time to learn the Yoko Tomoe Nage – the new backbone of your standup skills.
Make sure to visit Nick Delpopolo’s official website for more details, as well as to use the code JMJC40 for 40% off the price.