Use The Hip Bump Sweep To Set Up These 3 Attacks 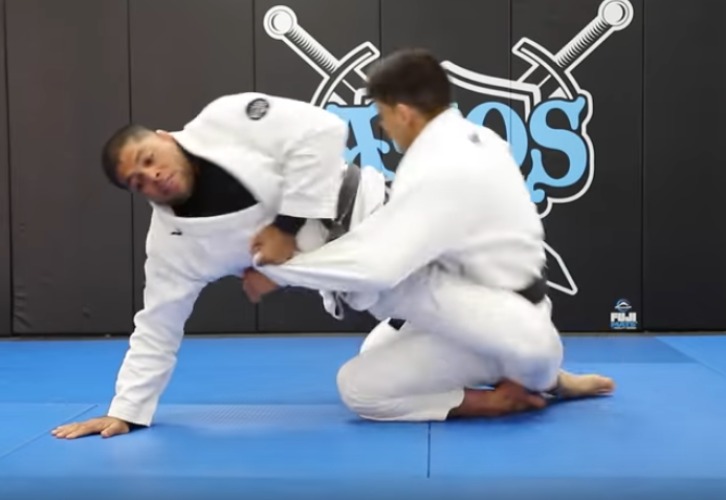 You’ve probably been introduced to the Hip Bump Sweep way back in the day, and you’re probably seeing it work much less frequently than it was the case before. The reason for this, generally, is that as you progress – so do your training partners and opponents. As they progress, they gain more experience; which enables them to see what’s coming. And there are much more difficult techniques and setups to anticipate than it’s the case with the Hip Bump Sweep.

But don’t fret! Even if it fails, you can still use this technique to your advantage – by using it to set up other attacks instead. Nick „Chewy“ Albin, from the Chewjitsu Youtube channel, demonstrates these options.

One of your opponent’s most common defensive reactions to the Hip Bump sweep will be to push you back to the floor by using their hand(s). In that case, go with the flow! Let them push you back; but what they won’t know is that you have a trap in mind.

Basically, when they push you away, Chewy explains that their arm is right where it needs to be place… For your Armbar! To set it up with success, make sure to grab at the back of their elbow as they push you down. Now, as your back goes down to the mat, pivot to the side – preferably at a 90 degree point.
From there, you can finish the Armbar; pinch your knees, have the opponent’s thumb pointing towards the ceiling and elevate your hips for a great tap.

Second to the above „they’re-pushing-against-me“ defense, you have yet another fantastic option. As they push you down, make sure that their hand ends up to the side of your hip. Then, as you’re falling down, swim your arm underneath their leg and grab the hand on their opposite side. From there, simply use the Pendulum Sweep to end up in a Mount position.

However, if they don’t start pushing into you and you managed to knock them off-balance, your opponents may post their hand down to the mats in order to avoid getting swept.
No problem! Grab onto their head so that you can take your leg out – the one underneath the arm the opponent’s using to post – and lock in the Triangle Choke. Now you need to correct your angle (yet again, it’s best to achieve a 90 degree one), triangle your legs once more in the right fashion – and tap them out.

USE THE HIP BUMP SWEEP TO COUNTER OVERLY DEFENSIVE OPPONENTS

To end this Hip Bump Sweep consideration, Chewy explains that you can use this technique to get out of a situation where your opponent doesn’t do anything. You know the feeling; you have your opponent or training partner in the Closed Guard and they are passive beyond comprehension! They just sit there, elbows locked in tight and they’re not doing a single thing. This makes it difficult to set up a submission or a sweep, as there is not much to, well, attack.

What can you do from here? You need to provoke some sort of a reaction on their behalf, something which will get them out of such a stagnant and stable posture. In other words, you need to engage your Hip Bump Sweep; this will off-balance them and they’ll have to react!
Once they react, see what you can do. Perhaps you can go for one of the three options described above; or you may even be able to sweep them immediately.

Watch Chewy demonstrate and explain these setups on the video below: