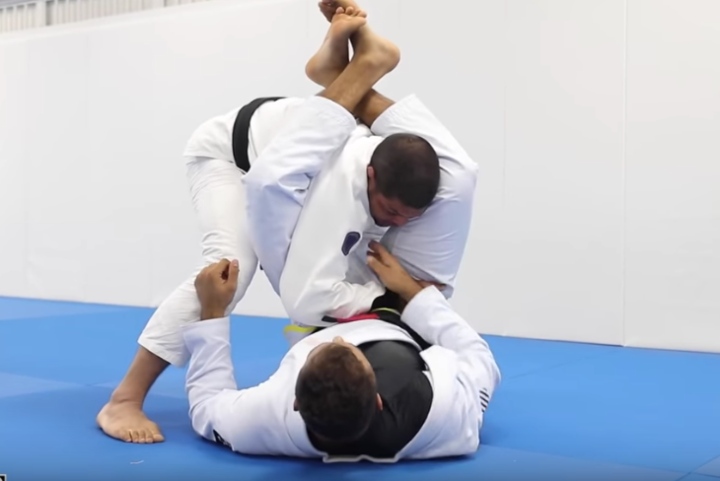 You know what they say – if you want to win big, sometimes you have to risk big as well! High risk=high reward, and that is often a very true statement in Brazilian Jiu Jitsu. Sometimes, you’ll go for a technique and risk falling into a much less advantageous position than you were in beforehand… But, more importantly, you could try something and put yourself in immense danger of actually being caught in a submission!
This is especially the case when going for the Over-Under stack pass; where your opponent is quite likely going to shoot for a Triangle Choke if they get the chance.

Here’s how to evade getting caught in that Triangle and pass like a boss, shown by Stephan Kesting!

WANT TO OVER-UNDER PASS? THERE’S A HIGH DANGER OF BEING TAPPED OUT BY A TRIANGLE

At the very beginning of his demonstration, Stephan shows that when you go for an Over-Under type of pass, it’s often a rather simple action on your opponent’s behalf to set up a Triangle Choke and submit you right there.

Now, this doesn’t mean that there aren’t some Jiujiteiros that can just „muscle“ their way out of that Triangle! Stephan explains that some guys just have really thick traps and necks and that, no matter how well you shoot the Triangle, you won’t be able to get the tap.
Furthermore, these are the same athletes that’ll actually start passing you in such a way that they’re baiting you to shoot for it! And the moment you sort of lock that Triangle around their huge necks, they simply drive through – and take Side Control.

However, you probably aren’t this type of an athlete. You’re, most likely, just a regular Jiujiteiro – with a „normal“ body frame. So you really don’t want to bait opponents like this, for you will be the one who’s going to get fished out.

Therefore, you need to take precautionary measures to keep yourself safe from getting triangled; but to, at the same time, keep your Over Under pass effective. The way to achieve this, Stephan demonstrates, is to – first and foremost – use your „under“ arm in the right manner.

What this means in practical terms is that you shouldn’t just reach out with this arm; this would be perfect for your opponent! Instead, the right alternative would be to grip the opponent’s sleeve with it – feed it with your „over“ arm first. Then, once you have this sleeve, pull it and get your elbow tight to your body.
If you can’t get the sleeve for whatever reason, just don’t extend your arm. Keep it short and, if you can, grip the opponent’s pants.

Your „over“ arm’s job is much more simple. The best bet is going to be to grab the opponent’s far-sided collar; you’ll see why in a second.

GETTING THE JOB DONE

So you have the grips! Now, Stephan says to get your knee – one on the same side as your „over“ arm – down to the mat. The other leg stays up, but you need to stay stable by bending it a bit. And this is the kicker… You can get a tap here! Simply drive the opponent’s knee into them and drop your weight across their neck, through your collar-gripping arm; this will place enormous pressure, and might force them to tap.
If they don’t tap out for whatever reason, then no problem. Stephan explains that you just need to inch your way to the guard pass – succeeding in it in a risk-free fashion!

Watch Stephan’s demonstration on the video below: