3 Gripping Strategies You Need To Know In BJJ 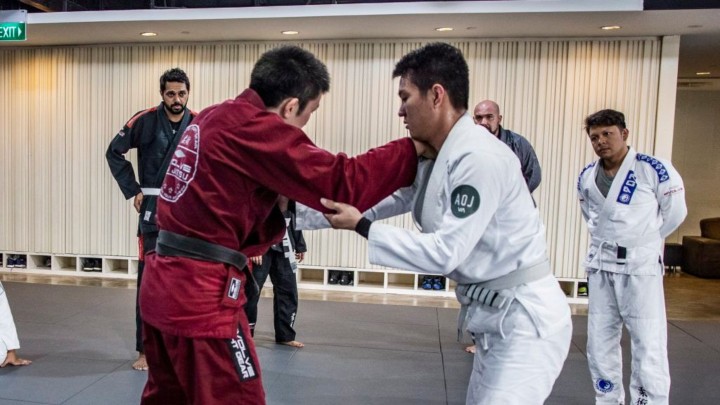 One of the most common explanations we hear from newer Brazilian Jiu-Jitsu (BJJ) practitioners when asked why they are hesitant to train stand up is that they “just don’t know what to do.” While the overwhelming majority of practitioners are familiar with the basic double and single leg takedowns, it can be difficult to attack with these if you don’t know the proper gripping strategies in order to set them up. Implementing a dominant gripping strategy will not only allow you to attack your opponent efficiently but will simultaneously help you stop your opponent’s attacks. Take a look at some of the common gripping strategies below, and then make sure you practice so you can see which work best with your preferred takedowns.

A great grip for BJJ practitioners who are new to the stand up portion of the art to learn is the standard collar grip. While there are many grip fighting strategies that provide numerous offensive and defensive capabilities, the collar grip is by far the most energy efficient. At the beginning of learning the stand up game, newer practitioners are likely to expend exorbitant amounts of energy attempting to get their opponent to the ground. Not only is this incorrect technique, but if you are too exhausted to grapple with your opponent once you have gotten him to the mat then the takedown was virtually worthless. This is why it is great to start with the Collar Grip, as it will prevent you from using excess strength and tiring yourself out.

The best time to use the collar grip is when your opponent approaches you in a very low stance. If he is crouched over, simply take the hand that is on the same side as the foot you have forward and grab the back of his collar so that your thumb is on the inside of his garment. Ideally, you would want your hand to be where the tag would be on a T-Shirt, right behind his neck.

This grip is perfect for beginners as it allows you to essentially shut down all of your opponent’s double and single leg attempts. If your opponent attempts to shoot in on your legs you can easily stiff arm him away, keeping him off of you. Often when trying to learn how to grapple on the feet it can be quite frustrating as your opponent will take you down before you have a chance to attempt your own takedown. The collar grip will allow you to keep your opponent off of you and give you a chance to take him down!

Of course, your opponent is not going to just let you take this dominant grip, so you will need to fight to achieve it. A good way to establish the same side Lapel grip is with a pass-off. If you are standing with your left foot forward, your opponent is likely going to be blocking you from grabbing with your left hand. If he is, take your rear hand (right hand) and grab his right lapel down low, near his belt. As it is so low it is going to be much more difficult for your opponent to block this grip. Once you have the low grip with your right hand, you can pull his lapel open making it much easier for your left hand to grab the lapel up near his chest. From here you can start attacking with all the powerful takedowns that this grip strategy provides.

One of the most common positions in the stand-up phase of Brazilian Jiu-Jitsu is the position commonly known as the bullfight. The bullfight occurs when both practitioners are looking to utilize a low, crouched over stance. As they approach, they simultaneously grab the lapels of their opponent, creating a stalemate scenario where both competitors have strong lapel grips and can keep their opponent from attacking, but are unable to attack themselves. This can be one of the most frustrating positions for beginners to be caught in as they are expending massive amounts of energy without being able to mount any offense.

A good rule of thumb to win the bullfight is to avoid pushing forehead to forehead, or forehead to shoulder with your opponent and instead attempt to “look in his ear.” “Looking in the ear” means that you have successfully achieved a perpendicular angle to your opponent, and your forehead is now on the side of your opponent’s head, usually around his temple. Of course, your opponent will not only be attempting to stop you from achieving this but will likely be looking to do it for himself.

A great way to get to the “look in the ear” angle is off of your opponent’s push. From the initial Bullfight where you and your opponent are looking at each other, drive into him, causing him to push back into you. Just as he goes to drive into you, step out to your left and momentarily push him away with your left-hand grip on his lapel. By stepping off-line and stiff-arming him, you will have created the temporary time and space to drop your forehead right on his temple, achieving the desired angle. From here you will have the ability to attack your opponent with a variety of single legs, double legs, and knee picks.

As each one of these gripping strategies has their own strengths and weaknesses, it is important that you try each of them so that you can feel how they work for your body type and preferred takedowns.