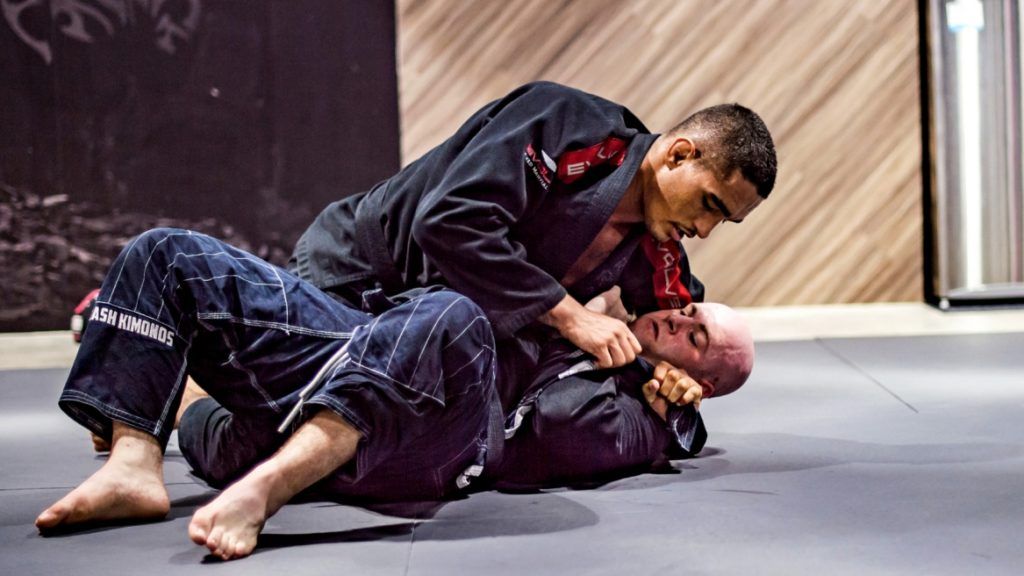 Side control is one of the most dominant positions in Brazilian Jiu-Jitsu (BJJ).

It’s also one of the worst positions to be in when you’re on the bottom.

In Brazilian Jiu-Jitsu, side control can often be mistaken as a temporary intersection between other dominant positions. But experienced players of side control know that it offers many opportunities for game-changing submissions and transitions.

Today, Evolve Daily will discuss the fundamental aspects of side control in Brazilian Jiu-Jitsu. We will also share our favorite submissions and transitions from this position. Hopefully, by the end of today’s BJJ 101 lesson, you will fall in love with side control all over again.

As with most positions in Brazilian Jiu-Jitsu, the best way to understand how to maintain the position is by analyzing what your opponent should be doing. That is, we should respect his ways of escaping side control and plan our moves accordingly.

Simply speaking, there are two primary ways for someone to escape side control in Brazilian Jiu-Jitsu:

Sure, that sounds simple. However, to implement these escapes, the person on the bottom will need to get to his side. That means you can remove their ability to escape by keeping him on his back.

Can you see where we’re going with this?

One of the fundamental aspects of side control in Brazilian Jiu-Jitsu is understanding the importance of keeping your opponent’s back flat on the mat. This is how you master controlling your opponent.

Here are some ways to develop a brutal side control game:

Typically, the person in top side control will look to establish head-and-arm control and drive their body into the body of their opponent. This works, and it is relatively effective.

However, there are better ways to do this. In the video above, Royce Gracie Black Belt Roy Marsh explains the most effective way to pin larger, stronger, or even more skilled opponents to the ground while in side control.

Once you’ve pulled his head underneath your shoulder, you can then drop the shoulder and apply pressure. Instead of getting up on your toes and driving your weight into your opponent, all you need to do now is merely drop your head-side leg all the way to the ground.

Now, you can work on trapping that far-side arm. You should grab where the elbow meets the tricep, which makes it more difficult for him to turn away and posture up.

The last tip? Blocking the hip is essential in side control. By using your knee to block their hip, you can now prevent them from turning into you and stop them from recovering guard.

Now that you know how to establish a commanding side control position, we can now look at the ways to set up submissions and transitions from side control.

Submissions from Side Control

There are three basic submissions we will cover today in this edition of BJJ 101.

The first and most popular option is the Americana/Kimura/straight armbar series. These submissions are all ways of attacking the far-side arm of your opponent.

In the video below, 2x Brazilian Jiu-Jitsu World Champion Teco Shinzato demonstrates an effective Kimura set up from side control.

If you’re wondering about the straight armbar setup, Brazilian Jiu-Jitsu Champion Gamal Hassan explains the process for executing this submission in the video below.

The increased mobility within the side control position also allows for choking options, too.

It’s essential to master a range of chokes in gi and No-Gi BJJ from side control. If you’re looking to begin implementing one of these submissions right away, you should consider learning the paper cutter choke as demonstrated by Brazilian Jiu-Jitsu Champion Eduardo Novaes in this video.

In this video, Brazilian Jiu-Jitsu World Championship Silver Medalist Almiro Barros explains a near-side armbar. This armbar is particularly sneaky as your opponent may be expecting you to attempt a spinning arm lock (or juji gatame), rather than just stepping up and finishing this submission on the near-side arm.

Again, this is another simple, yet very useful submission from the side control position.

Transitions from Side Control

If your submission game isn’t working for you, you can always pass to another dominant position. This will help you earn some quick points and allow you to attack your opponent from a different area.

Here are five simple (and practical) transitions from side control:

Some of these positions are more familiar than the others. Knee on belly is the simple act of stepping up out of side control position to place a knee on the belly of your opponent. It’s another dominant position and is often used as a pathway to full mount.

The video below explains the process of obtaining the mount from side control:

Kesa Gatame (or Judo Side Control) is a relatively uncommon variation of side control. Most students prefer to stick with head and arm control, yet Kesa Gatame is an excellent way of attacking your opponent and applying a different type of pressure. The video below explains the transition:

The transition to North-South can be used to either establish the position or as a way to transfer to the opposite side.

Here’s a great video that explains how to transition to North-South from side control:

If you want some of that 10th Planet flavor in your BJJ game, you can transition to Twister Side Control, as well.

That concludes today’s BJJ 101 lesson. You’re now equipped with a brutal way of maintaining side control, several submissions, and many transitions from this already dominant position in Brazilian Jiu-Jitsu.