The Tightest Brabo Choke Set Up By Fabio Gurgel 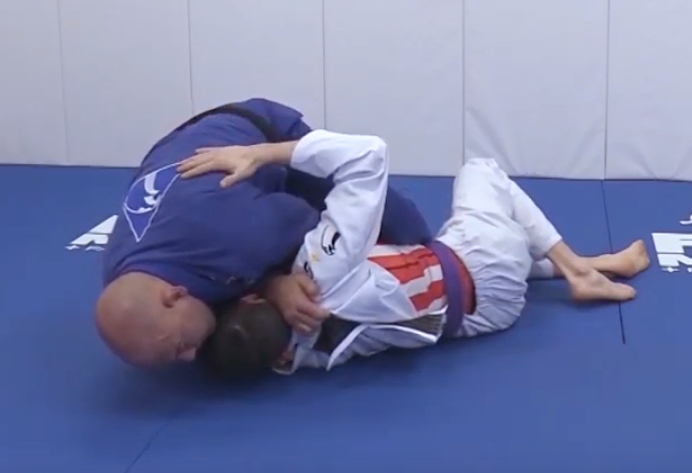 How many times have you gotten to Side Control, only to have your training partner or opponent go into ultra-defense mode? They keep their elbows tight and smartly fend off all of your attempts of any sort of a submission setup… Frustration goes up as you’re trying to figure out – man, what do I do from here!?
It’s simple, actually. You have to make them react, and then you will be able to set up your submission. And one of those setups – in this case, for the Brabo Choke – is shown by one of the world’s best coaches and one of the founders of the Alliance Team, Fabio Gurgel.

FIRST, OPEN UP THEIR LAPEL

Starting from Side Control, with his training partner keeping his elbows tight to his body, Fabio Gurgel demonstrates that the first thing he does is that he opens his partner’s lapel. He opens it up as much as he can, and then feeds it to his other hand, doing so deeply underneath his training partner’s shoulder.
From there, he goes for the Knee On Belly position and does the switch, getting his lapel grip to his other hand.

KNEE ON BELLY – MAKE THEM REACT!

But, why the Knee On Belly position? Fabio explains that, in order to perform the switch – to get the lapel grip on the other side – you need to make your opponent react. In this case, you want to make them do so by turning into you; which is phenomenally done when you place the Knee On Belly as their first reaction will often be to turn their hips away from you.
What this means is that you don’t need to place too much pressure onto your opponent with your knee. And why? Because your goal is not to hold on to that Knee On Belly position; but to use it as a means to get your opponent to react by turning sideways, into you.

So, as his training partner turns into him, Fabio explains, he is coming deeper and deeper into the submission – his neck comes right on top of the Fabio’s forearm, which is exactly that which makes the Brabo Choke work.
Then, as his opponent moves into him, Fabio switches his previous Knee On Belly leg to a posting position, while his other leg goes to the ground. At the same time, he grabs the lapel with his other hand; while his previous grip takes on the lapel again, albeit a little bit higher this time.

Then, in order to finish the Brabo Choke, Fabio emphasizes that you shouldn’t lean forward. Instead, you need to close your forearms together and move your head on top of your training partner’s or opponent’s head, helping yourself do so by driving off the posted leg – and you have the tap.