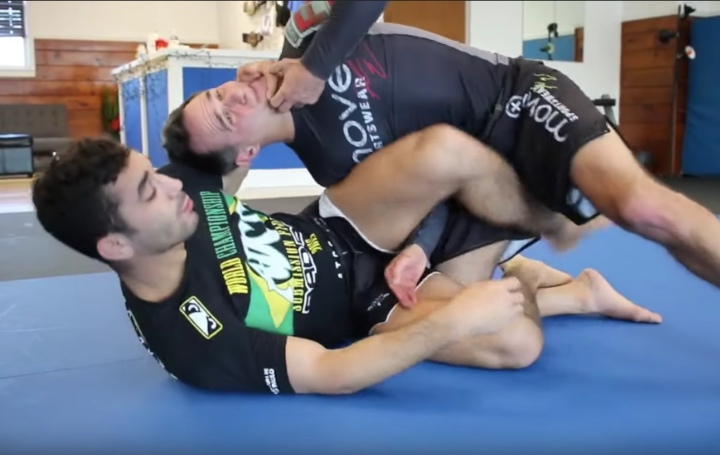 The leg lace smash pass is a widely used pass in Brazilian Jiu Jitsu. Grappler’s Guide Michael Perez has a few great counters for it though – so tune in and read on!

Michael starts from a knee shield position, which his partner smashes by utilizing the leg lace pass. Without being able to do anything offensively until he gets his smashed knee out, Michael points out that you need to create some space between your partner and yourself by utilizing your frames: one of your hands needs to be placed on his shoulder and your other arm’s forearm against his throat, pushing against him simultaneously.

When he feels that his partner’s shoulders are away from his knee, Michael brings that knee towards his chest. Here’s an important point: before his foot clears his partner’s arm, Michael’s arm (the one which he used to push against his shoulder) switches places and grabs the partner’s opposite arm tricep. This is an arm drag starting point.
As soon as he’s done that and the foot has cleared his partner, Michael goes for an arm drag, gets shoulder to shoulder with his partner and grabs onto his hip. While doing so, he emphasizes that you need to post yourself on your elbow for your base and not just remain laying on the ground. Then, he pulls his partner’s hip into his own lap, while hip-escaping backwards. From there, he takes the back and attains the seatbelt position.

Another option, instead of placing your second arm’s forearm on the opponent’s throat to create additional framing at the beginning of the technique, that you can use is to grab your partner’s arm at the wrist (one that’s under your knee). That way, once you start clearing your knee, you have already secured a grip – which makes it easier to go for the arm drag afterwards.

Michael says that he uses the chinstrap predominantly as a means to get the opponent distracted and to keep his arms busy. Why? Because, Michael explains, when his arms are busy and are addressing some threat posed by you, that’s when you have a window of opportunity.

Therefore, when your partner’s head is too close to yours and he’s deep into his smash pass, it’s a good idea to utilize the so called „reverse chinstrap“. Go for it with whichever hand’s further from your hip and get your shoulder behind your partner’s head. Then, start torquing it.
If his partner doesn’t do anything, Michael points out that he’ll be able to simply go for a sweep from there. If he does, however, start fighting with his hands, then the goal of getting his arms busy is achieved.

If your partner initially decides to fight your chinstrap with only one hand, Michael advises you to redirect it from yourself. This will hinder him ineffective, and he’ll use his other hand to free his chin as well. This is when you can clear your knee, grab his tricep or armpit, go for the arm drag, grab his hip and take the back – or, simply, you can just stand up and go for the guillotine.
Michael also gives an additional, great tip here: to be more effective, you can always open up your bottom leg’s knee when taking the back. However, when doing that, be sure to post yourself by using your fist – not your hand.

Watch the video below to see it explained in action:

Check out www.grapplinginstructionals.com for further information on the Lotus Lockdown, the world’s most complete Lockdown instructional in a Gi. 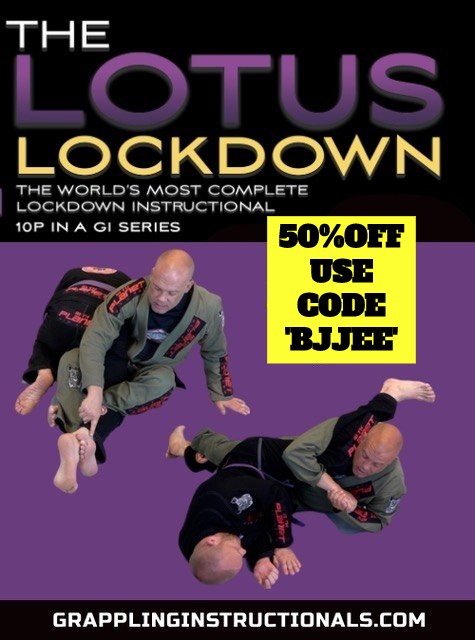