Neutralize The Knee Shield With This Pass By Andre Galvao 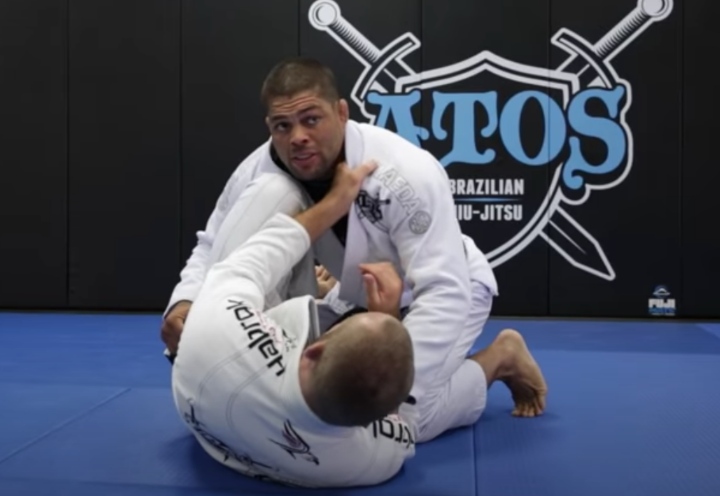 Passing the Knee Shield is never an easy task! Plus, if the roll or the match is in the Gi, then it can get particularly difficult and nerve-racking to get out of this position and move into a more dominant one. However, it can be done! What’s more, the Gi can actually be utilized to your advantage; making the Knee Shield pass easier.

DEALING WITH THE BOTTOM LEG FIRST

The first thing you have to realize, that Andre Galvao points out throughout his demonstration, is that the knee poses a problem when it, as well as the opponent’s shin, are forming a comfortable post against your torso. That is, just because the opponent’s knee is somewhere in front of you, that doesn’t have to mean that it’s a tough bargain!
For, if it’s too far out to one side – where it isn’t making any contact against your body whatsoever – then, well, it isn’t an obstacle at all; you can easily pass the opponent’s guard from here, as they aren’t doing much to prevent you from doing so. Additionally, if their knee is making contact with your body, but their shin isn’t – if the knee is too low, that is – then feel free to commence to the pressure passing agenda.

So, the need for neutralizing the Knee Shield comes when it’s forming an actual shield against you. The way you’ll get to solving it at first, Galvao shows, is making sure that you have good balance; grip the opponent’s collar with one hand and use the other to grip his belt on the back.
Then, you need to get into a more dominant position. First, pinch your knees against the opponent’s bottom leg. Secondly, bring your „inside“ leg’s knee down towards the opponent’s calf. When you do this, it’ll be easy for you to use this leg’s foot to cup their bottom leg. From there, swiftly cross your other foot over it; while simultaneously switching your inside leg to a far post.

The position you’re going to end up in will resemble the Knee On Belly one. One of your legs is bent and pinning the opponent’s leg to the mat, while your other one is providing you with the balance.
But even though you’ve taken a lot of attacking power away from them, you still need to deal with the opponent’s Knee Shield.

This is where the lower part of the Gi – your opponent’s pants – will come in handy! For, sure, you could take care of their Knee Shield by „punching“ the knee so that their leg ends up in the pocket between your hip and thigh… But they may still be able to pull the leg out of here!
So, Andre explains that what you need to do is let go of the opponent’s belt and grip the bottom of their pants instead. Then, pull their leg so that its knee ends up resting over your lap. Also, pay attention to the fact that you need to straighten your post leg out and lean in towards the opponent with your torso; done so as to rest your weight on top of them, making it increasingly difficult for them to escape.

From here, all that you’ve got to do is Windshield Wiper to pass the guard to the side. If they Hip Escape here, no problem. Pin their leg to the mat, post your shin on it and loop to the other side instead.