Joe Rogan On Ric Flair’s Figure-Four Leg Lock: “He Was Literally Giving Up An Inside Heel Hook” 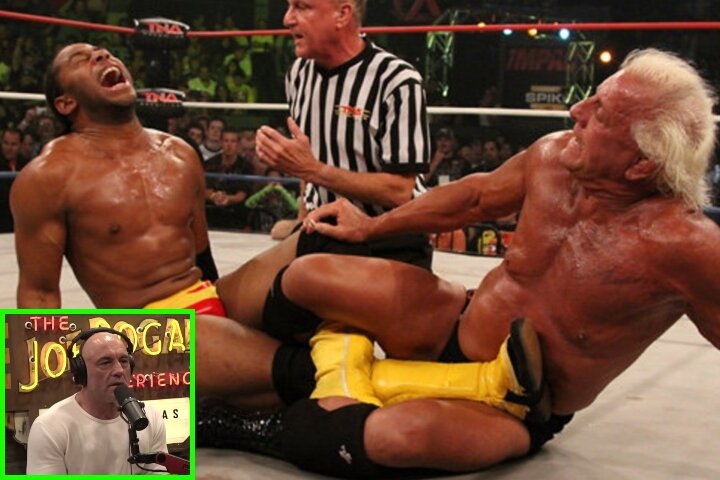 UFC commentator Joe Rogan has an enormous love for BJJ – which, among other things, shows through his critiques.
For instance, in his recent Joe Rogan Experience episode with Rick Rubin, he criticized the legendary “Figure-Four” leg lock pro-wrestling move.

This technique was the Ric Flair’s signature move. But Rogan criticizes it, emphasizing that it’s inefficient because invites an Inside Heel Hook counter:

A bunch of [pro] wrestlers got mad at me, [as] I was trying to explain how dumb a Figure-Four leg lock was. Because I was like: “He was literally giving up an Inside Heel Hook.”

He explained that this sort of a technique would never be seen in a BJJ competition:

Inside Heel Hook is one of the most devastating submission techniques, because once someone gets it the time you have to tap is so small before your knee gets ripped apart.

And so, a Figure-Four leg lock you’ll never see in a Jiu-Jitsu competition… It doesn’t work.
It’s funny in that regard, you know, you are doing this thing [in pro-wrestling] but this thing in the real world is the worst thing you do.

What do you think about the Figure-Four lock? Would it ever make sense to use it in a BJJ match?