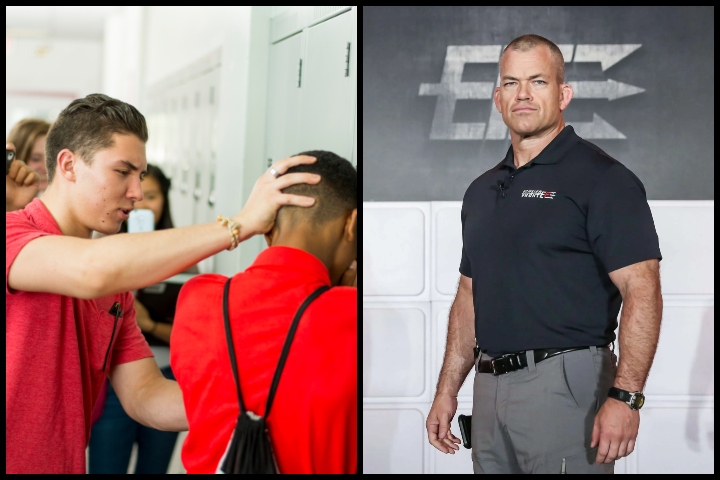 Bullying is, sadly, a frequent occurrence in schools worldwide. And if you are a parent of a child that’s a bullying victim, you’ve probably been tempted to “jump in” and protect them.
However, you can’t let your kid be dependent on you. Jocko Willink explains why:

You have to train your kid to be able to contend with the world. Not tell your kid that you’re always going to be there to back them up and beat up anyone that gets in the way. Like, that’s not going to help your kid become a better human.

Instead, you’ve got to teach them to fight:

And what’s crazy about this is that, you know, as you mentioned earlier… If there’s a bigger, a much bigger person than you, they can still beat you up, you know.
And that’s the thing with kids; if you’re 10 years old, you can be a really well-trained 10 year-old – but a 14 year-old is probably going to get the better of you. And maybe the 15 year-old… But there are still going to be situations where you’re going to lose a fight.

However, even if your kid does lose the fight, bullying will probably not continue:

That being said, the risk for the bully goes exponentially higher when he knows that he’s got someone on his hands that actually knows how to fight.

And so, the probability of bullying taking place goes way down. And, even if that bully wins the fight, he’s not going to look good. It’s going to be a problem.
He’s going to get a worthless victory, because he’s going to barely get the better of someone that’s a lot smaller than the bully himself.

Listen to more of Jocko Willink’s thoughts on the matter on the following link.