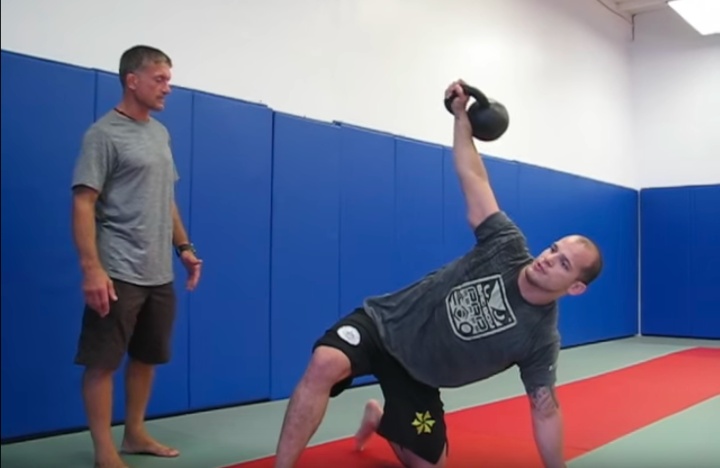 Getting better in BJJ is a never-ending journey, one that consists out of many steps along the way. These steps, however, are not just the numerous techniques and principles that are directly associated with the performance on the mats; but there are also „side quests“, which are of equal importance to jiujiteiro’s performance and longevity. One of those crucial side quests is strength training, which is of utmost impact for BJJ practitioner’s success.

So, without making it too complicated (remember – it’s often the easy and simple that does the trick), let’s take a look at three strength exercises you might ever need for BJJ, with BJJ Strength’s Laurence Griffiths!

1) THE TURKISH GET UP

If he could pick just one exercise for Brazilian Jiu Jitsu, Laurence says he would choose the Turkish Get Up without a doubt. The primary reason behind that, he explains, is that the Turkish Get Up teaches a BJJ practitioner to use their whole body as one unit; to utilize each muscle in the right way and order, which crosses extremely well to BJJ.

Secondly, this exercise replicates the movement patterns of BJJ: as you hold the kettlebell with one hand and as you post on the elbow of your other arm, you get your hips away – all of which is done very often in Brazilian Jiu Jitsu! Just think of a technical stand up, which essentially mimics this movement.

The Turkish Get Up also requires a lot of rotational strength of the core and core stability, which are both very important aspects of BJJ excellence. Shoulder strength and health increase as well through the various ranges of motion which are required for the successful execution of the exercise. On top of that, as the movement is done with a straight arm, the elbow and the wrist get their fair share of a workout as well.

Laurence goes on to say that any good BJJ strength training program has to possess a focus on developing a good hip drive. In regards to that, he believes that the Kettlebell Swing is the ultimate exercise for that purpose.

The reasons are numerous. The Kettlebell Swing is a dynamic exercise which applies well to BJJ, where an ability to move quickly with hips is of enormous importance. Also, the instability that this exercise brings into the movement develops tremendous core strength. Thirdly, Laurence believes that the Kettlebell Swing doesn’t place as much load on the spine – particularly, the lower back – as other exercises (the Deadlift, precisely) do.

Pulling strength is of obvious importance for BJJ, Laurence continues, and one of the best pulling exercises that you can do is the L Pull Up.

The reason why this exercise is so amazing is that, due to the position that legs take on while performing it, it requires a lot more leverage to pull oneself up to the bar than in a regular Pull Up. This makes the back and arm muscles work harder than usual, as well as shoulders in terms of the strength and stability in the shoulder joint.
It also places adequate stress around the forearm and the elbow joint, so that a jiujiteiro not only ends up with strength development – but with increased joint strength as well.

Watch the video below to see Laurence explain and demonstrate these exercises: