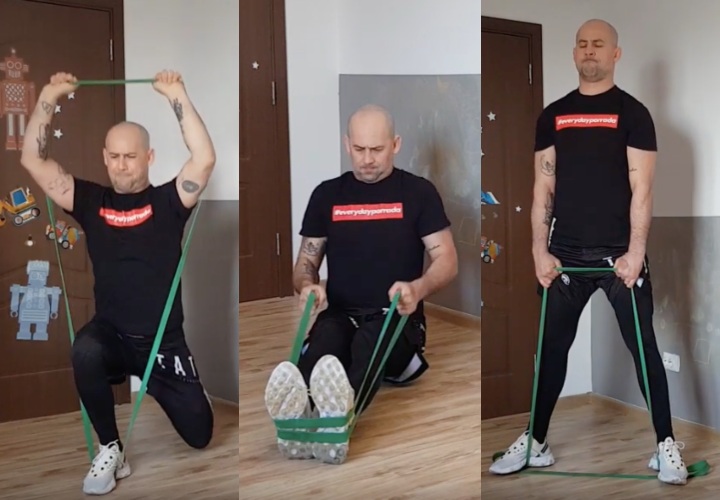 If you’re stuck at home and can’t go to your BJJ academy nor to the gym for whatever reason, you might be nervous; fearing that you’ll lose all your athleticism and gains. Heavy sweat pours down your forehead with worrying ease, as you clench your fists and demand answers: „Oh man, how do I stay fit!?“
No need to fret! You just need an elastic band and you can have a great, full body workout!

Professor Tudor Mihaita, a 2nd Degree BJJ Black Belt and instructor at Absoluto BJJ, demonstrates some effective exercises you can perform with the elastic band.

Professor Mihaita first shows a familiar bicep exercise. To perform it, simply stand on the band, grab its ends and start performing bicep curls. Make sure that your elbows are tucked in.

To make this, as well as other exercises, more or less difficult, Professor Mihaita demonstrates that you can widen or narrow your leg stance, as well as straighten or bend your knees. Also, in order to develop isometric strength – which is crucial for BJJ – do the exercises with a 3-3-3 tempo; 3 seconds moving the elastic band „up“, then a 3 second hold on top of the movement, and then lower down for a duration of 3 seconds.

The bent over row is a great exercise for increasing your pulling strength, as well as for building the thickness of your back. In order to do it, stand on the elastic band with a pretty narrow feet placement, grab the band’s ends, bend your knees and bend yourself over at around a 90 degree angle. Then, pull; make sure that your scapulas are engaged, that you’re not just pulling with your elbows.

Yet another great pull exercise shown by Professor Mihaita is the seated row. Simply sit down, wrap the elastic band around your feet, take its ends and straighten your back. Then, by using your scapula muscles, pull the band as close to your rib cage as possible. Make sure that your elbows don’t flare out.

If you want to increase your pulling strength with one arm at a time, you can do it with the elastic band as well! Get down into a lunge position, with your front foot over the band. Use the arm which is on the same side as your front leg to keep the band in place, while you use your other hand to pull it.

To increase the difficulty of bodyweight push ups, wrap the elastic band around your upper back and over your shoulders. Then, grab its ends, press them to the ground and start doing push ups – you’ll find that the resistance makes them a lot harder than the regular ones!

To emulate the bench press, Professor Mihaita shows that you need to do the same thing with the elastic band that you’ve done with pushups; but now, lay down on your back. From there, tuck your elbows in and press up.

If you want to increase your shoulder strength, stand on the „inside“ of the elastic band with feet around hip-width apart and lift its ends above your shoulders. Then, press up towards the ceiling with control and your elbows in.

To do the squats with an elastic band, set everything up in the same way as you did for the overhead press. Now, however, simply squat down – the tension that stretches through the band will make it more difficult for you to squat back up.

Professor Mihaita demonstrates that you should place your feet on the elastic band’s ends, and then grab either just the inside or both parts of it. Hinge at your hips and squat down, press your scapula muscles together and keep your arms straight; engage your legs by pushing through the heels and do the sumo deadlift.

In order to perform the regular deadlift, stand on the elastic band in a stance narrower than shoulder width-apart and grab the band just outside your feet. Hinge with your hips (make sure that it’s above the 90 degree angle), keep your scapulae retracted, your back neutral and your elbows straight. Then, drive through your heels and make sure that you don’t overextend your head; and you’ll be doing the deadlift with great form.

Finally, for a unilateral leg exercise, Professor Mihaita shows that you can simply step on the inside of your elastic band with one leg. Then, lunge back with the other leg as you press the band’s ends up above your head; and you’re doing the overhead lunge!

Watch the video below for Professor Tudor Mihaita’s full demonstration of these exercises: