How Does Joe Rogan Exercise – What Does His Workout Look Like? 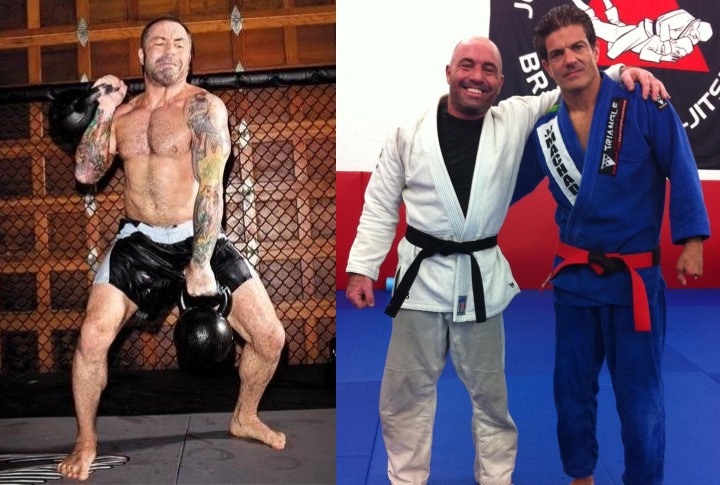 Joe Rogan needs no introduction, especially for Jiu Jitsu folks. He is the host of the well-known Joe Rogan Experience podcast, UFC’s commentator – and generally a cool guy! Lots of people like the way he leads his lifestyle; among other things, the way he takes care of his health is a great inspiration to many. And, as you know very well, exercising is a big part of staying both physically and mentally fit.
But how does Joe Rogan actually exercise? How do his workouts look like?

THE WAY JOE ROGAN WORKS OUT

Now, Joe does a lot of different things in order to keep his physical prowess up to par. In the epizode #978 of the Joe Rogan Experience podcast, he mentions that he lifts weights three times per week, runs twice per week, and also does Yoga twice per week. He implied that he doesn’t have a strict program to follow; but he also makes sure that he checks these boxes no matter what – except in the cases of injury or sickness.

It’s also very important to say that he doesn’t seem to prefer doing lengthy workouts, emphasizing that even just 40 minutes is enough for a great training session.
Additionally, Joe puts a lot of emphasis on consistency over intensity. He understands the advantage of growth and injury-evasion gained by putting in consistent work; as opposed to short-term training adventures where you go all out.

With that said, let’s take a look at some of his workouts’ specific components – and how you can implement them into your training routine.

As already mentioned, Joe does weightlifting three times per week. However, this doesn’t just include lifting weights per se – something which you’re probably already doing – but additional things as well.

For example, he enjoys working out with his kettlebells. So how do you incorporate them into your workouts as well? Keep it simple; Gorilla Cleans, Kettlebell Swings, Kettlebell Squats and Kettlebell Squat Thrusters, Ketlebell Dead Snatches… All of these are fantastic additions to your training and can be effectively used to get a really good workout in, without spending too much time.
Then, he seems to enjoy working with battle ropes quite a bit as well. Now, if you haven’t tried battle ropes, you’re missing out on a great shoulder and cardio workout. They’re easy to implement into your workout routine and work best when done in the form of interval training.

And that leads us to the cardio part. Joe runs two times per week, but it’s not just about the slow jogs; instead, he also does hill repeats! These are notoriously difficult and will get your legs burning – and heart pumping – in short time.
Also, he has often praised the rowing machine on his Instagram Posts. This piece of equipment is designed to make you gasp for air, so give it a shot as soon as you can!

Of course, as a Brazilian Jiu Jitsu black belt, former Taekwondo champion and MMA fan, Joe Rogan has said that he enjoys training these martial arts whenever he has the opportunity to do so. However, he has also repeatedly emphasized the importance of Yoga (and „Hot Yoga“) as a part of his daily schedule.
This is nothing to wonder about, because Yoga is a rather fantastic tool for becoming a stronger individual; particularly for Jiujiteiros. It will help you get rid of those aches and pains and improve your Jiu Jitsu in the process by a whole lot.

You can read more about the fantastic benefits of Yoga for Jiujiteiros here.