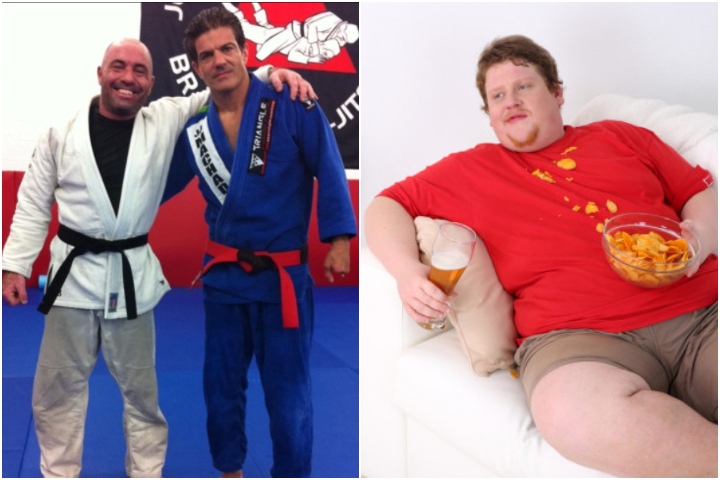 You probably have that one friend who says something like: „You don’t know me when I’m angry bro“, or: „When things come to shove, I see red, you don’t want to be messing.“ That is to say, he thinks that it’s enough to be really angry to beat someone up, despite their skill level.
But that’s just not true. There’s an enormous gap between someone who’s a trained fighter and a regular person.

Joe Rogan explained it clearly in one of his older Joe Rogan Experience episodes:

Do you know how people see someone do stand-up and they’re like: “I could fuc*ing do that.” That’s because they’re just talking. That’s what fighting is like.

You see a guy like [Michael] Bisping, who’s like a normal guy. I mean obviously, he’s very athletic and all that, but he is not Shaq or something, he’s a regular-sized human. And he’s moving like a regular human, so you’re like: “I could do that!”
But you have no idea! You have no idea, you’re beyond helpless [against him]. If he grabbed a hold of you, you’d be a dead person.

Joe explains that even if you’re someone who trains, people who are professional mixed martial artists could take you „apart“. There are levels to it, no matter if you’re a regular person or not:

There are intellectual levels [for example], there are people who are very smart, like Neil deGrasse Tyson or someone like that whom I had on the podcast. He talked to me and I was like: “God d*mn I’m so fuc*ing stupid!”
There’s levels to this, to this understanding of life. But that’s what it’s like with everything; with standup, with art work… With someone choking the life out of you.

He stays realistic with himself and his own „regular person Jiu-Jitsu“ skills:

Man, I’ve been doing Jiu-Jitsu since 1996… And if I were to roll with certain people, it’s just a matter of when I’m going to get strangled.
They don’t even have to be bigger than me, they can be smaller than me. It’s like: “When am I gonna tap? When is it coming?”