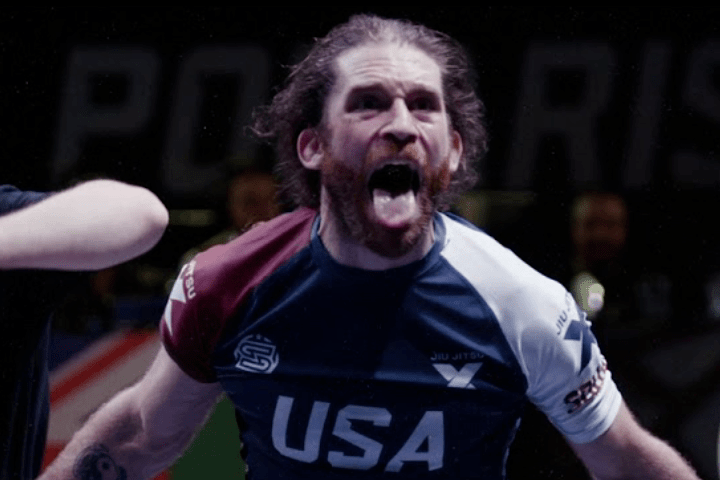 The Polaris Squads 3 event was packed with many high-speed matches! And, in the end, it was the team USA that took home the win:

Before the Squads matches took place, there were some preliminary ones – as well as a superfigtht which featured Kyle Boehm vs. Nastasa Silviu. In what was the shortest match of the night, Boehm managed to tap out Silviu by sitting to guard, getting into a quick leg entanglement, and Heel Hooking Silviu at around 30 seconds into the fight.

As far as the preliminary matches are considered, Charlie Baker won against Mason by decision. So did Ollie Bates against Wali Abdullah. Libby Genge managed to win via Arm Triangle against Bryony Tyrell in the late stages of the match; and Jack Sear utilized the Heel Hook to tap out Ciaran Brohan with just a few minutes in.

The first hour of the Squads matchup featured a safe-to-play and tense stand offs. Dan Strauss went against John Blank in what was a heavyweight clash with little action – Blank played guard and Strauss stayed on top. The more exciting matches, however, were led by the UK’s Jed Hue, who had some fast-paced exchanges against Roberto Jimenez and Hunter Colvin.
But this slow-paced nature of the tournament wasn’t set to last. Late in the first half, Nathan Orchard took Ireland’s Kieran Davern’s back from standing – and then ended the match with a neck crank. So, the first half ended with the 3-0 score in favor of the USA.

As a result, the matches in the second half were more aggressive and less tensed-up. This led to Geo Martinez getting a tap against Dan Strauss, although seemingly unintentionally. As Martinez was trying to pass guard, Strauss tapped due to what seemed to be a pec or shoulder injury.
Roberto Jimenez also submitted Bradley Hill via the Rear Naked Choke. Hill nearly took Jimenez’s back at first, but the American reversed the situation in a slick scramble, taking the Hill’s back instead. He successfully isolated one of his arms and sunk in the choke.

Today, the promotion published a highlights video to their Youtube channel. Take a look at it here: