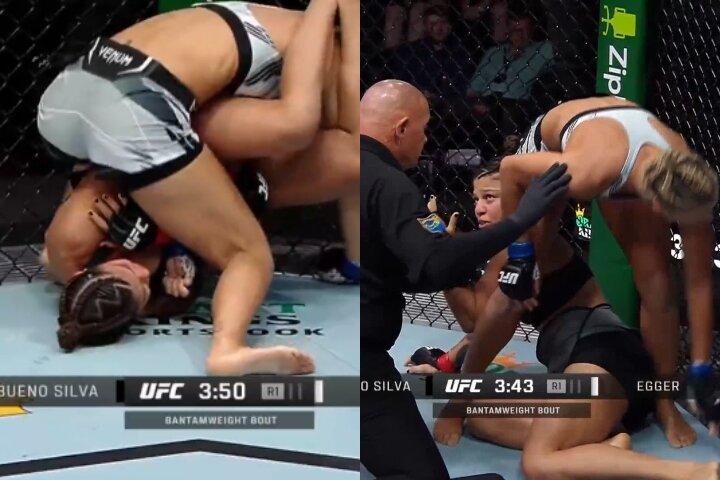 Mayra Bueno Silva faced Stephanie Eggers at UFC Vegas 59 – and submitted her in the very first round. However, controversy arose immediately… As Eggers claimed that she didn’t tap out.

Namely, Bueno Silva got an Armbar from Closed Guard. The submission was deep, but Eggers’ arm was out of reach for the audience – and the referee – to see. So, when Bueno Silva let go of the submission because her opponent tapped, no one was able to see the tap itself.
Eggers stood up and protested against the stoppage immediately. Bueno Silva told her: “Hey, you tapped”, but Eggers continued protesting. Silva asked for a video replay, but that did nothing; as none of the cameras was able to show whether Eggers tapped or not.

That’s when the referee went to the judges for a decision. The first judge said that he didn’t see a tap, while the second one said that there was a tap for sure. Herb Dean, a famous UFC referee, was sitting right next to him and said that he also saw the tap – but his opinion wasn’t considered.
Then, the third judge said that the claim by the second judge was enough for him, and so the fight was officially ruled as a submission win for Bueno Silva.