What Does A Belt Promotion In Jiu-Jitsu Really Mean? 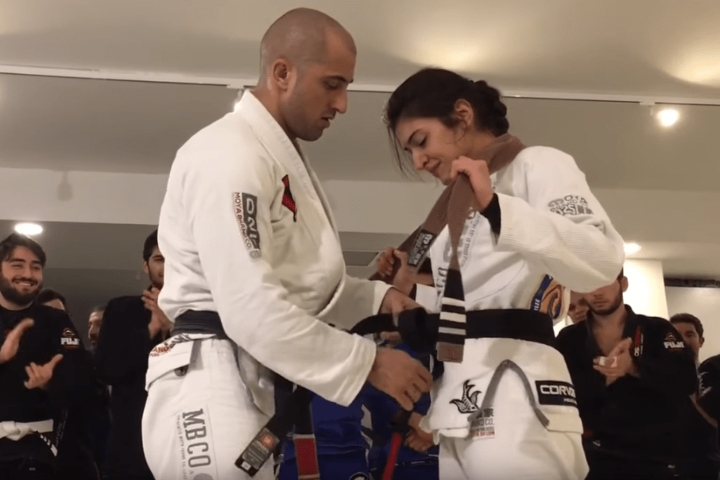 When you started Brazilian Jiu-Jitsu, having seen your professor’s black belt tied around his or her waist must have seemed intimidating. The bright red band, the stripes that were barely hanging on, the faded black color, the rips on the belt itself – it told you that your professor had probably been practicing BJJ for a long time. And depending on how faded his belt looked, the more legit he seemed. Which probably made you wonder – how long till I get my black belt? My blue belt?

Whether you’ve received your first stripe on your white belt or have been awarded a blue belt, a promotion is a promotion. Your professor has acknowledged all the effort you’ve put into BJJ. Whether it’s showing up to training regularly, showing ample knowledge of techniques and being able to execute them properly, competition experience, sparring performance, or just plain tenacity – all professors have their own reasons why they choose to promote a certain student.

Being promoted in BJJ

For all students, being promoted is one of the most rewarding moments of their BJJ journey. It means that you’ve overcome many physical and mental challenges and that you’ve proven yourself skill wise. Although it may seem that your professor isn’t testing you, he is probably watching your every move, especially if he deems you worthy of a promotion. He will probably ask you to spar with someone of a higher rank/bigger size. From this spar, he will gauge whether or not you have demonstrated a high level of accuracy and efficiency according to your belt level or higher.

At the white belt level, for example, students should be able to identify and be familiar with the main positions in BJJ. From these positions, they should know how to do one technique from each position and master it. Students should also become used to the idea that they won’t win every spar, even if they are bigger and stronger than their opponent. At this level, students should prioritize getting used to the body movements related to BJJ, especially how it feels to do techniques against a resisting opponent.

Sparring is one of the main tenets of BJJ. In fact, BJJ is one of the few martial arts that encourages sparring on a regular basis. With each spar, a student is able to test himself against someone of the same rank or higher. When considering a student for promotion, a professor might look at how a student performs during sparring. If a student is able to consistently submit and out-skill his or her peers, then he or she is more likely to get promoted.

Although competition is not a necessity for promotion, some professors assess students according to how well they perform during tournaments. If a student does better than other students of the same rank from other schools, then he or she is eligible for promotion.

Character of the student

It’s no surprise that a professor would take a student’s character into consideration. After all, it separates the future black belts from those who eventually plateau at their belt level. These practitioners know how to manage their ego – they tap when they’re caught in a submission (regardless of whom they’re sparring), they use technique over strength, they acknowledge their mistakes and work on them, they drill before and after class, and always work on becoming the best versions of themselves possible.

If you want to get promoted in BJJ, you’re probably going to want to show up to training. By being consistent, you show your instructor how dedicated you are to learning BJJ. It also helps you get better at understanding techniques and improving your cardio for sparring and BJJ in general. The more consistent you are, the more likely you are going to be promoted.

What it means to receive a stripe/stripes

Many, if not most academies award stripes as a form of recognition of progress and skill. The number of stripes you have (maximum of four) shows a student’s skill level relative to others within the same rank. However, four stripes on one’s belt does not always guarantee a promotion. Usually, academies will only promote a student to the next belt if he or she has four stripes. When you reach the black belt level, stripes are acknowledged as degrees and awarded over time.

What it means to receive a blue belt

When you are awarded your blue belt in BJJ, you have some knowledge of escapes from several positions. You’re also more adept at passing the guard, particularly the more basic guards. You’ve probably also become used to sparring and don’t find it as tiring as your first did.

What it means to receive your purple belt

Receiving your purple belt in BJJ means that you have dedicated a further few years of your life to training BJJ – and this is a feat that not everyone can accomplish. In fact, many people quit or plateau at the blue belt level. At purple belt, you’ve probably established your game/s and are working on becoming a well-rounded BJJ student.

What it means to receive your brown belt

When you get your brown belt in BJJ, you become more aggressive in your attacks, constantly looking for submissions, sweeps, and passes. You become a threat from all positions and have learned or created counters to most (if not almost all) techniques.

What it means to receive your black belt

Most black belts in BJJ have devoted almost 10 years of their life to practicing the gentle art. In fact, according to Ryron Gracie, “Only 1% of people that train BJJ will get their black belt.” Because they’ve trained for so long, they have the utmost respect for the belt. They appreciate the thoughts, actions, and efforts of their teammates on and beyond the mats and treat them as equals. It requires a lot of responsibility because the name of the art is in your hands.

With all this being said, promotion should be the last thing on your mind when you train BJJ. Yes, it is an honor to be promoted, but it should not be the reason why you practice the gentle art. You should practice BJJ because you want to be the best version of yourself possible, because you respect the art and want to learn as much as you can. With this mindset, who knows what you could achieve?