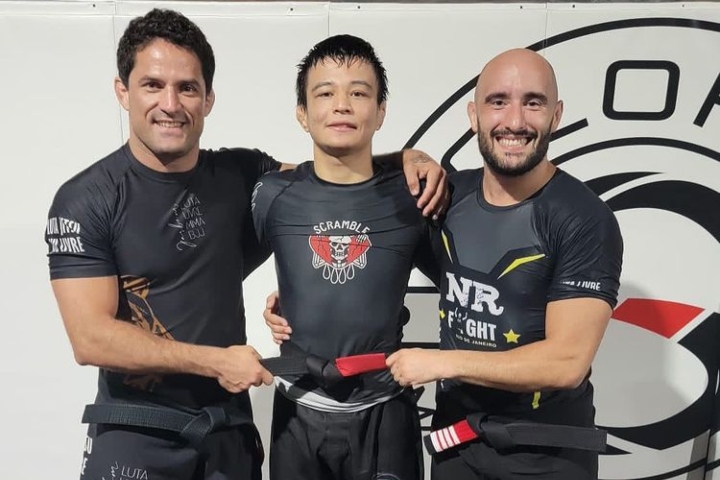 Joao Miyao is a well-known Brazilian Jiu-Jitsu black belt competitor who, together with his brother Paulo, has stacked a number of medals in just about every important BJJ tournament in the world. He is widely regarded as one of the best BJJ athletes of his generation.
But that doesn’t stop Joao from further evolving himself and his grappling. Actually, just a couple of days ago, he was promoted to the rank of Luta Livre black belt by Nicolas Renier!

This promotion for Joao shouldn’t come as a surprise, however. The Miyao brothers have always been famous for their outstanding and consistent work ethic.
For instance, here’s what one of their teammates had to say about their training regime back in 2014:

They are very focused, dedicated, methodical. I’ve never seen them rest. Once, I saw Joao wasn’t training and found it strange. I realized he was putting ice on his knee.

The training starts at noon and ends 15h. They go beyond time. Half an hour before the training 17h, they are already in the kimono. That ends at 19h, and they continue testing positions and go on until later.
They have an open mind to  Jiu-Jitsu. They are great inspirations and good training partners, help everyone. Whenever I’m tired, I think: ‘The Miyaos are training. And they are champions.”

Once, when they went to Abu Dhabi, they trained from 10 am to 10 pm. It was amazing. They trained with everyone who came, like some robots making positions repeatedly.
I’ve never seen them outside the academy. They eat the food right there in the gym. From time to time, go to the market. They train hard all day. On Sundays, I think they go to church.