Emil Fischer Competes in Gi at ADCC Trials: “The Optics Are Hilarious” 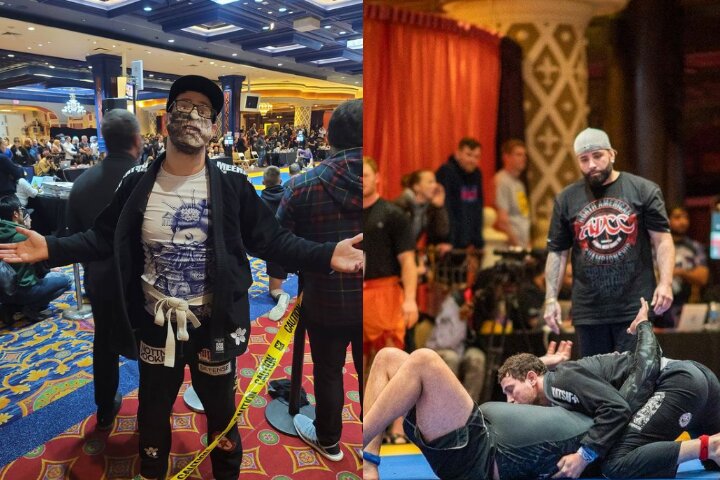 Believe it or not, the ADCC ruleset isn’t strict about having to wear No Gi gear. Rather, its competitors are allowed to wear a Gi. And, in the early days of the ADCC tournaments, some competitors chose to do that. Today, however, they mostly opt for No Gi.
This hasn’t been the case for Emil Fischer at the most recent ADCC East Coast Trials, though. He competed while wearing a Gi, together with a white belt tied around his waist!

Fischer lost in the very first match, and chose to take it to social media to explain why he wore a Gi:

Good news: competed at the @adcc_official trials today, wore a Gi, entered the 99+ kg division – it seemed like a good idea.

Bad news: lost by a sweet Knee Bar. I swept my opponent with a funky forearm crush sweep got on top felt good but when he recovered half guard he hit a remarkably cool knee bar from bottom.
As much as it may seem like a big troll or setting myself up with excuses I had reasoning for my choices:

1. The gi adds significantly more friction which means my game becomes more potent in the setting

2. The prohibition against grabbing the gi serves as a psychological advantage because my opponents are compelled to grab and when they’re not allowed to it causes confusion

3. The optics are hilarious

My reasoning for entering the heavier division was that I felt I had a better chance of being faster and more aggressive, and the field was significantly less stacked than the under 99.
This of course backfired in a way. Had I not been wearing Gi pants, I may have been able to rotate out of the Knee Bar. And had I entered a weight class with people my size, I may have had a less physically imposing first opponent. But I made my bed and laid in it. Back to the drawing board and on to the next one. Which is next weekend.