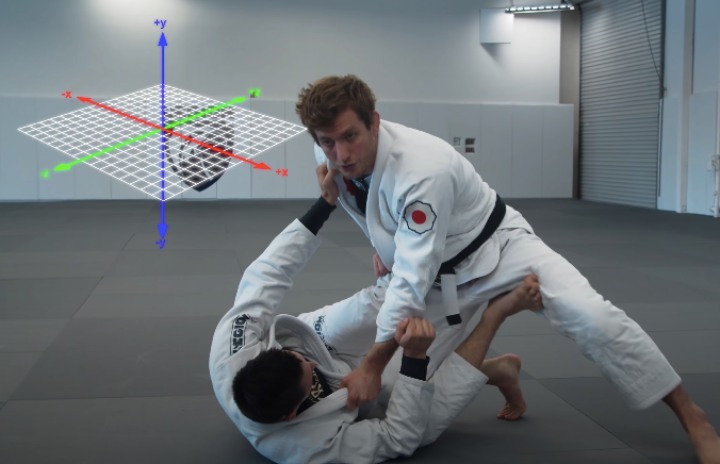 There are a number of ways to pass an Open Guard. However, when the absolute basics of guard passing are considered, it’s all very simple; it’s just a matter of understanding the underlying Up-Down-Left-Right pattern of movement.
Once you understand this, you could be successful in passing the guard without using any actual technique!

Keenan explains that there are 6 directions that you can move in when trying to pass someone’s Open Guard. You can move back, forward (like in a Knee Cut pass), to the left or to the right (such as with an X Pass), down (as in pressure passing) or up (the Throwby Pass).
However, Keenan points out that one of the mistakes that jiujiteiros make is that they move only in one or two directions. For example, they’ll utilize the Knee Slice and – once they meet resistance – they’ll just keep trying to brute force their pass. This might work; but it isn’t as pragmatic as flowing from one direction to another.

And that right there is Keenan’s basic point: in order to be a successful guard passer, you have to change directions! Why? Because if you attack your opponent on one side, they’ll defend it – which means that their other side will be more vulnerable!

LEARN TO COMBINE THEM!

So, when you Knee Pass and your opponent defends, why force your way through? All of their focus, all of their frames to keep you away are aimed in one direction… So why not pass to the other one, where they’re considerably weaker? Where they’ll have to recompose themselves and retain their guard?
Why not force them to do this yet again, again and again; changing directions from left to right to up and down, forward and back, and mixing it all together however you see fit… Draining the opponent’s energy and opening them up by switching directions until you’ve outdone them and passed their guard?

The ability of tying in passes, one after another, is a fantastic one. It’s something that the world’s best passers are very efficient in, Keenan explains, such as Rodolfo Vieira. However, there’s an additional aspect to guard passing that you have to understand if you want to truly become better in it.

SEPARATE YOUR OPPONENT’S KNEES FROM HIS HIPS

And that is? Keenan explains: it’s the line your opponent’s knees and hips make with one another. You can visualize it as a vertical line that positions the knees and the hips onto the same level. A lot to do with passing in BJJ has to do with manipulating this line.

The most dominant and the most often seen way of doing so is by separating your opponent’s knees from their hips. Don’t let them be in the same line! Keenan demonstrates that this is one of the most frequently utilized methods for guard passing, anywhere from the lower to the highest top-tier levels of BJJ.
A simple way of doing this is by creating space between your opponent’s knees and their belt. Be it by doing a Longstep Pass where you’re artificially creating that space and then reinforcing it by pushing their knees away; or by utilizing the Toreando Pass to pull your opponent’s knees away from the chest, or… This principle is used in the majority of passes.

And you know what? Keenan says that you can pass someone’s guard knowing no real technique, as long as you use these knee-separation and direction-switching principles in unison.
He demonstrates this and many other details on the video below: