When You Do This, They’ll Stop Trying The Over Under Pass On You 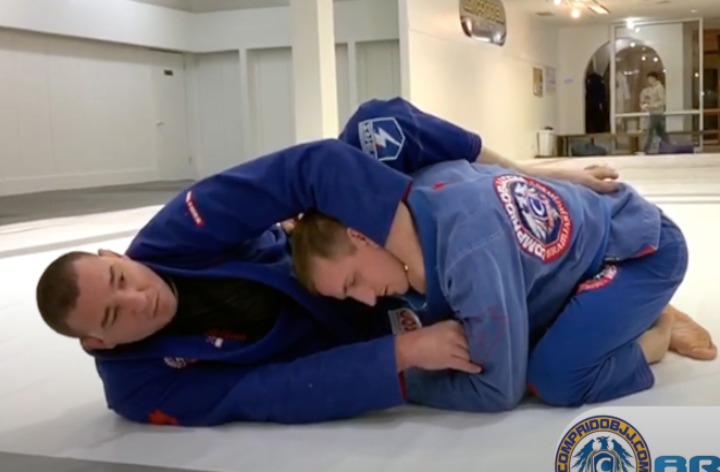 Yup, we hear what you’re saying! There are a LOT of BJJ techniques that carry terrifying names and that, yet, don’t live up to the expectations they’ve set for their notoriety. Simply said – the technique doesn’t support the name it has been given!
The Hangman Choke, however, is a different story all together. You will use it to submit your training partners and opponents in a quick and nasty fashion; even more so, you’ll often do it in a situation where they’re thinking that they have the upper hand!

POSITION YOUR HANDS AND LEG PROPERLY – THEN, CREATE SPACE!

The setup, Comprido demonstrates, starts from a situation where his student has went for an Over Under Pass. Protecting himself from getting passed, Comprido is using one of his hands to frame on the student’s bicep muscle; and he places his second hand onto the student’s other arm, gripping its tricep.
He also emphasizes that your bottom leg’s position is of crucial importance as well! Don’t just leave it laying there, doing nothing. Instead, use it to get as good of a hook on your training partner’s or opponents’ leg that you can.

If they start placing pressure on you, Comprido says that you need to create space. You do this not by pushing against them, not by using excessive force; but by simply escaping with your hips.

SETTING UP AND FINISHING THE HANGMAN CHOKE

Once you have established this position and created enough space, Comprido showcases how the hand which was gripping his student’s tricep muscle now goes around the student’s neck and grips his collar from the inside. Notice how he sets his grip up, however: he does so with a sort of a „pinch grip“. This makes up for a particularly hidden and stealthy setup your opponents and training partners will have difficulty noticing! Also, the elbow of this arm needs to go around their neck as well.
As soon as his arm is in place, Comprido explains that he is going to start pushing its elbow to the inside and then swing his „free“ leg in front of the student’s shoulder – one on the same side as Comprido’s choking arm. Pay attention to how he positions this leg not just in front of the shoulder, however; but over his choking hand’s knuckles as well.

To achieve the Hangman Choke from there, Comprido utilizes his whole body. Namely, this involves stretching his upper body while, at the same time, using the leg he swung over to push the student away. These two motions work together and he gets the tap.

Watch Comprido demonstrate the Hangman Choke setup and its details on the video below: