Opinion: Should You Rank Older People and Women Differently in BJJ? 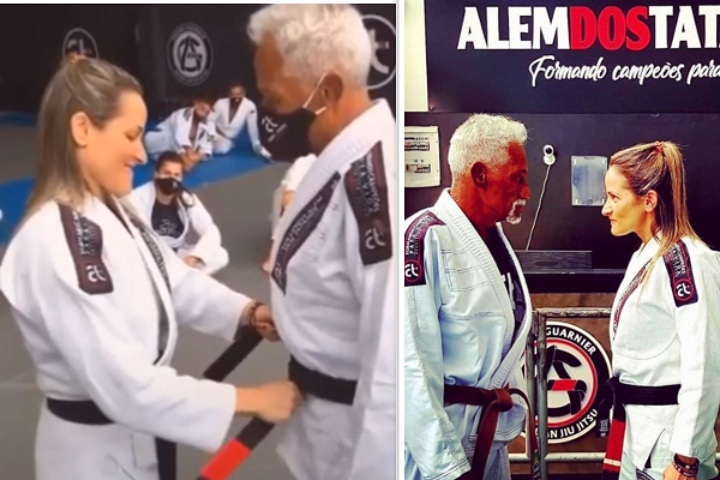 Do you think that older people and women should be rank promoted differently than other people on the mats? Do you think that there should be some special criteria, that will set them apart from everyone else – and make them progress either faster or slower than their training partners?
Here’s an opinion: the answer is „yes“. But not because of the reasons you may be taking into consideration.

RANKING DIFFERENTLY – BUT NOT BECAUSE OF SEX OR AGE

It makes no difference who is getting promoted to which rank and when, because there are no unified rules of student promotion in Brazilian Jiu-Jitsu. There’s nothing that, on a worldwide and universally acceptable level, says that „this and this are the clear regulations of when an instructor should promote his/her student to the next belt.
In other words: there is nothing unified that stipulates when someone deserves the next belt rank.

Therefore, the task and responsibility of promoting their students falls onto the instructors. They have to decide when someone deserves a belt or not… And when they do promote someone, it’s a decision based on a subjective assertion.
That way, some people get ranked more quickly than others, even though their skills may be on an approximately the same level. And, well, some less skillful people get promoted despite the fact that their same-belt-peers are much more skilled than they are.

WHAT SORT OF „RANK SYSTEM“ IS BEST?

So, if there isn’t an unified system and the instructor promotes people based on his/her own thought process, what should be done to best mitigate any sense of confusion… For example, when someone who is an older person gets promoted faster than their younger friends?

It should be a two-fold maneuver. Firstly, the instructor needs to instill the feeling of trust and competence into his students. So that, even when they or someone they know acquire that belt, that they know that this belt was earned.
And secondly, having a set of principles that are more or less set in stone would be of great help. For example: knowing how to do something from a given position should be a non-negotiable.

This sort of an approach would be of great help and students, not just in keeping the BJJ academy thriving; but in helping the students evade the trap of thinking that they’re somehow less worthy than their training partners are.
It should take into account the overall skill of an individual vs. the other people on the mats. But it should also take into account their own progress and the obstacles that they’re overcoming on the tatami.

OPINION: FOCUS ON YOU AND THE JOURNEY, NOT ON (YOUR) RANK

Now, here’s something that may serve as a good idea. Whenever you think about questions such as this one, or someone gets promoted in your vicinity (who you think has earned their belt way too easily), stop.

Just start ending this thought process. The only person you should be truly worried about in this case is you. Your progress, your time on the mats, your attention and the drive to succeed.
Anything else – including the thought process of: „They didn’t deserve that belt“, that stuff doesn’t serve the purpose of you getting better in Jiu-Jitsu at all.

Just focus on getting better yourself. Help your training partners, if you can. But if you can’t, don’t fall into the trap of thinking about „injustice“; think about your own improvement instead.