“It’s Either Me Or BJJ!” How To Deal With Toxic Relationships And BJJ 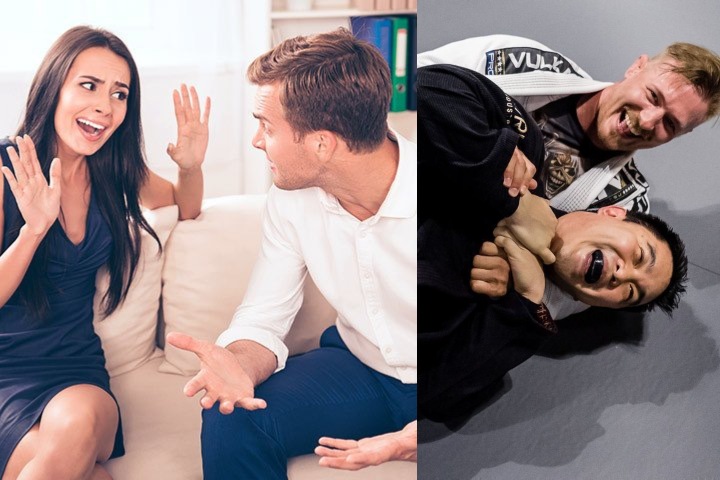 „It’s either me or BJJ!“ Have you ever been in that sort of a situation, where your significant other becomes really mad because of your love (and, sometimes, outright obsession) with Jiu Jitsu… Maybe even putting an ultimatum, such as this one, out in the open?
Here’s how to deal with those kinds of remarks and with toxic relationships in general, in connection to your BJJ practice.

The first thing you should do is to try and talk with your significant other. Conversation should always be the first thing you’ll resort to in these kind of issues; most predominantly, because you want to figure out if BJJ is the real issue – or if there may be something else at stake.
That is, they may not really have a problem with your Jiu Jitsu, but with something else. Perhaps they’d like you to spend more time with them. Maybe they feel as if you aren’t giving them enough attention. Or maybe BJJ is your new hobby so they’re afraid how this activity of yours will affect the relationship as a whole.

If one of these or similar things is the problem, then great. That means that there’s something concrete that you can get to solving, through more communication and mutual trust; which, if possible, will show that your relationship isn’t actually toxic – but that it simply needs more communication within itself.
After you manage to show your significant other that you truly care about them, that you’re willing to invest time and energy into the relationship – that BJJ won’t change your attitude towards them, that is – then you’ll be training at ease.

NO COMMUNICATION AVAILABLE? IT’S TOXIC – GET AWAY

But what if you try to establish some sort of communication, and it simply isn’t working? Perhaps your significant other is listening to what you’re trying to say, but they can’t (or don’t want to) reciprocate either by words or actions… Or, maybe they just outright don’t want to listen to you; stubbornly persisting in their own views of the world, not wanting to hear a word you say.

In that case, we’re sorry to inform you: but your relationship is toxic. If there’s no way for you to communicate well about something that you so deeply care about, such as Brazilian Jiu Jitsu, then the relationship you’re having with the other person is only going to break havoc on you. And not just in terms of Jiu Jitsu and how you feel about the gentle art; but also in other areas of your life.
Because, listen. Your significant other should be someone who listens to you and wants the best for you, even when the two of you don’t really see eye to eye. They want to see you happy, and for that reason they’ll be willing to communicate and compromise. If not, well… Why do you want to be with that person? You’ll just be miserable.

DO IT FOR BJJ, DO IT FOR YOURSELF

Imagine (if it isn’t a reality for you already) coming back from training to see your significant other, feeling bad because you know that you’ll have an argument with them. You feel as if you’ll sink, instead of feeling exhilarated because you trained and became better on the mats… You feel that there are hours of sadness and empty silence coming up; instead of happiness and laughter because you’re so glad that your significant other enjoys your BJJ-induced smile.

Do what’s right, for yourself. Continue training BJJ, break that toxic relationship up; and find someone who supports and communicates with you.