Finding The “Sweet Spot” When Passing The Guard with Carlos Machado 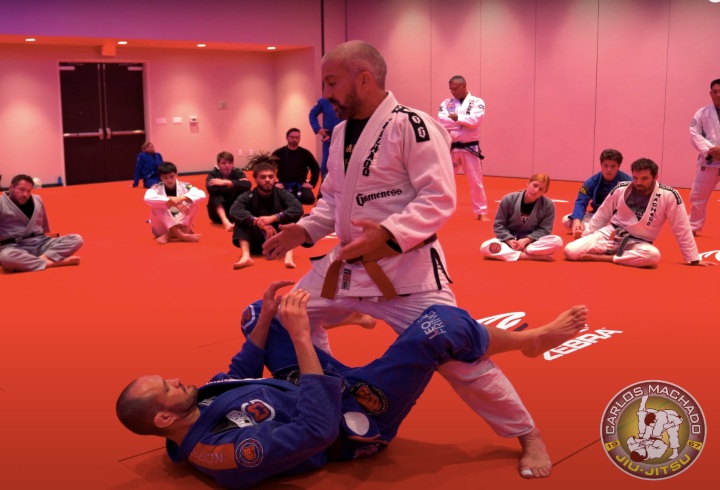 Generally speaking, when you encounter a problem within your Brazilian Jiu Jitsu, it’s a good idea to think about how you can solve it as soon as possible. However, if you’ve done that and had scarce success, it might be a better to take a further step back and not think about improvement only based on that which you already know; but consider if there’s something big that you’re missing in your overall approach – perhaps a certain concept.
With that said, one area where a lot of Jiujiteiros have problems at is guard passing… But, if they apply the sweet spot while passing, then a lot of their worries shall vanish!

The legendary Carlos Machado explains what this sweet spot is and how to utilize it to your advantage.

WHY USE THE SWEET SPOT?

Carlos says that, quite simply, the sweet spot is a position from which you cannot be attacked effectively… Here, you don’t have to worry about anything; not about being submitted, not about being swept. In other words, it’s a position which you’re comfortable in and can basically plan out your next steps; as well as when things start getting a little too hectic.

WHAT DOES IT LOOK LIKE AND HOW TO USE IT?

Now that we know why it’s a useful position to learn, let’s see how it actually looks like and how to use it.
The end position looks like this. Carlos demonstrates that you’ll be standing in-between your opponent’s legs; with one of your knees pressed well into the opponent’s thigh muscle – and with your other leg underneath the opponent’s second leg, while being half-extended. You’re not slouching down, but keeping your posture upright, as well as keeping attention on what your hands need to be doing.

And what your hands need to do is be on the lookout for the grips from your opponent! But don’t be afraid – this is supposed to be a neutral position, shouldn’t it? That’s correct; in this case, that means that even if your opponent does somehow manage to grip your sleeve or your collar, it’s no big deal. You’ll be able to swiftly and safely pull them off. (Pay attention to what Carlos has to say on this topic of taking the grips off, especially in regards to the collar grip – it’ll benefit your progress so much!)

To use the sweet spot to the best of your abilities, Carlos explains that you should look at it as surfing, utilizing the right weight distribution where and when necessary. Also, pay notice to how Carlos doesn’t overcommit; he calls this „lazy Jiu Jitsu“, where you expand less energy than your opponent does. In this case, that means that you’ll go progressively into the guard pass once you see an opening for it through the sweet spot… And not immediately go for the end position, such as Side Control!

To learn more, watch Carlos Machado explain the sweet spot and how to use it on the video below: