Cobrinha’s 8 BJJ Solo Guard Retention Drills – Do These Every Day! 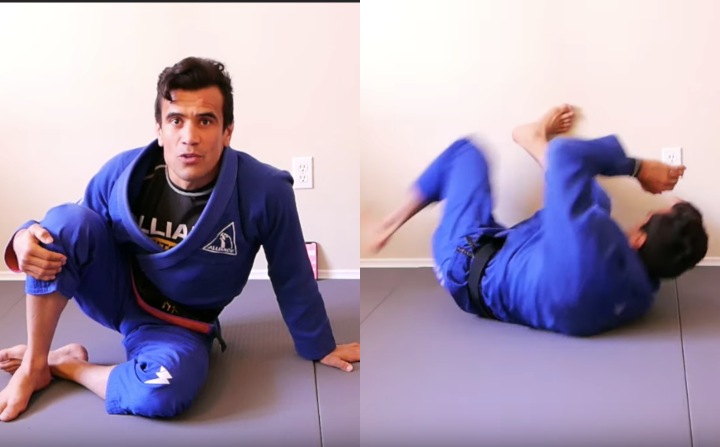 There’s nothing worse than feeling your BJJ skills slowly fade away due to the lack of training… And look, we get it! Your academy is probably closed, so you can’t go over there and train your heart out. However, that doesn’t mean that there isn’t something you can do to preserve your skills – such as your guard retention!

The legendary Rubens Charles „Cobrinha“, an IBJJF World Champion and a three times ADCC gold medal winner, shares 8 solo guard retention skills; ones that you can do at home and that he believes every jiujiteiro should do every single day.

Cobrinha points out that the drills are supposed to be done one minute each, with 30 seconds rest in between.

The first drill he demonstrates is the Cross Over. All you need is a wall; simply step on it with one leg at a time, shifting yourself to the side as you do it. As with all of the subsequent drills, make sure that your hips are actively engaged and off the floor.
Do this for one minute – it will help you loosen up the hips.

The second guard retention drill, Cobrinha emphasizes, will help you with your Reverse Hip Escape. Pay attention to how, as Cobrinha does this drill, he’s actively pushing off the wall in order to shift his hips side to side, never staying flat on his back. Also, notice how he extends his „free“ leg, but not completely.

The next drill is designed to help your backwards Hip Escape. Notice how this drill is very similar to the previous one; except in this case Cobrinha doesn’t constantly switch his legs, but keeps one foot on the floor, while the other one is free. Again, pay attention to the extension of the free leg, as well as to how Cobrinha is never flat on his back.

After one minute passes, you need to switch legs immediately and repeat the drill with your other leg on the wall for yet another minute.

After 30 seconds of rest have passed, it’s time to do a drill which will greatly help your guard retention in Leg Drag situations.
This one’s pretty similar to the Cross Over, right? Indeed – but look at how Cobrinha’s hips are a lot higher off the ground and how he swings with his free leg, making a semi-circular motion with it. Also, notice how he rests on his shoulders when shifting to the side.

The fifth solo drill that Cobrinha demonstrates is meant to improve your inverted guard retention in a Leg Drag situation. In essence, this one’s very similar to the previous drill; except here you’ll be inverting yourself as you push off the leg you’ve planted on the wall – using your hands and other foot to help yourself make a full roll.
Then, once you finish the roll, simply switch your legs up and do it on the other side.

Oh yes! You can improve your trusted Shrimp by using the wall as well! Simply do it in the same fashion as you’d do it on the mats; except in this case the leg you’re not pushing off of the floor with will be placed on the wall and push off from there.
Don’t slack, do it in a full range of motion!

The seventh drill shown by Cobrinha is a variation of the Hip Escape; a Knee Shield guard retention one. It’s very similar to the Reverse Hip Escape drill; the only difference is that Cobrinha uses the foot he’s planted on the wall to elevate his knee and his hips higher as he switches his legs.

Cobrinha’s final drill is an additional Reverse Hip Escape one. In this case, he has both of his feet planted on the wall. Then, he places one to the ground, doing the Hip Escape and then removing his „wall leg“; after which he quickly repositions his feet back to the wall and repeats the same thing on the other side.

Watch Cobrinha demonstrate these drills on the video below: