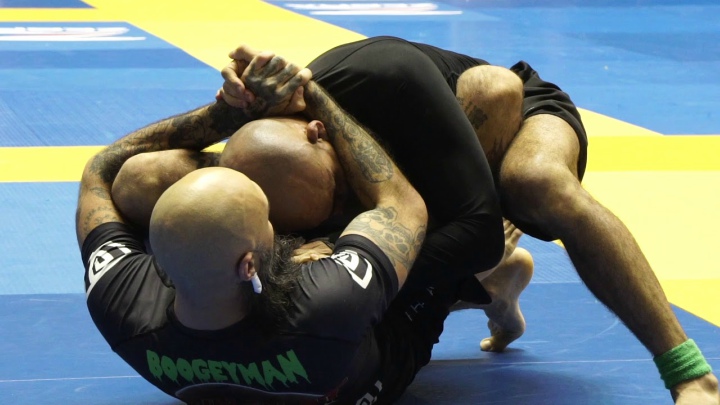 Richie Martinez, more often known as „The Boogeyman“ is one of those jiujiteiros that are known for their entertaining style and unexpected moves! He is a 10th Planet black belt under Eddie Bravo and a top ranking no gi competitor, as well as an owner and head coach of the „10th Planet Freaks Gym“ in San Diego.

A fan favourite of many, he has told us a bit about his breakdancing background and tips for those who want to try out breakdancing in order to supplement their Jiu Jitsu, as well as about his not-so-fantastic beginnings in BJJ and a great story of practicing Jiu Jitsu with his girlfriend.

BJJEE: Richie, we’re very happy to be sitting with you – thank you for being a part of this interview!
Most of our readers know you by your nickname, „The Boogeyman“. Could you tell us how you got it in the first place?

Richie: Thanks for asking me to be a part of this interview. Well, my nickname was originally my BBOY name, my breakdancing name that is, and it was given to me by my brother Geo… You see, I was always tall and a little intimidating with a 20 inch mohawk, and also – boogie is a form of getting loose dancing-wise, so the nickname fitted me in two different ways… So yeah, that has been my name for as long as I can remember.

BJJEE: So it traces back to your breakdancing days. Would you mind telling our readers why you started breakdancing – and how was it that it led to you starting BJJ?

Richie: Yeah, so before we did Jiu Jitsu, me and Geo had danced for many years. We traveled all over the world doing it… It was exciting. But, actually, we started dancing because our next door neighbor at the time had came home from a family trip with his cousins, and he has learned a break dancing move – the windmill – with which he was always trying to show off in front of girls. So, one day me and Geo started trying to copy break dance moves from the MTV and BET music videos, before anyone really had internet. And one day, our neighbor tried once again to show off, and so me and my brother went out there after him with our moves to shut him down. This was probably our first unofficial first dance battle (laughs).

Going to Jiu Jitsu from dancing was never an intention for me. I never thought anything could give me the same passion or drive the dancing did until I found BJJ.

Essentially, we started Jiu Jitsu because we had an opportunity to teach dancing at a Jiu Jitsu school/Dance studio. Geo started doing it before I did and I’ve seen seen how competitive it was, so it made me want to try it out.
Me and Geo have always been competitive in everything we did, so it was kind of cool to find something new that we could compete at against others.

BJJEE: So it can be said that it was your competitive drive that, at least in part, attracted you to BJJ in the beginning. And what was Jiu Jitsu like for you when you first started training it? Have you thought of yourself as „good“ in it?

Richie: My early Jiu Jitsu wasn’t off to a best start. I was a pretty decent white belt in the gym, but I haven’t won one match as a white belt. It got me to the point that I was telling myself that maybe I should stop doing it, because it was probably not meant for me.
When I got to the moment when I was actually about to quit, I ended up getting my blue belt and that’s where everything turned around. I started winning every tournament I went to after I got my blue belt. I think it gave me confidence that I didn’t have before… It was almost as if someone believed in me and I didn’t want to let them down.

BJJEE: We’re all very happy that you persevered, as you are a very entertaining jiujiteiro and such a positive addition to the BJJ community! Your skills are something that we are sure all of our readers enjoy watching every time that you’re competing.

And you have gone to show that breakdancing has transferred well into your skillset. Would you recommend our readers to take it up as well, in order to further their own Jiu Jitsu?

Richie: Dancing showed me how to move my body in ways that most people would never be able to. It showed me how to compete in front of huge crowds with no fear… Those are the two big things that I feel dancing helped me with.

Even though it sounds cliché, breakdancing is all about being free and having fun. If something isn’t that way for you, then why do it? That’s the best thing I could tell anyone trying to pursue breakdancing… You will build yourself a lot by practicing it, especially in regards to your strength, balance, creativity and movement. All of this will help your Jiu Jitsu.

BJJEE: Thank you. Could you, also, share some advice that you think is important for white belts?

Richie: Hmmm, so some advice for the white belts reading this would be to, first off, become a good student and teammate, as well as to pay attention during classes. Most instructors mean well and simply want to help you out. Plus, bear in mind that most of us instructors have already made the mistakes so you don’t have to make them yourself.

And, also, create goals that are achievable. That way, you’ll always have something to work for and that way you will always be motivated to work hard. 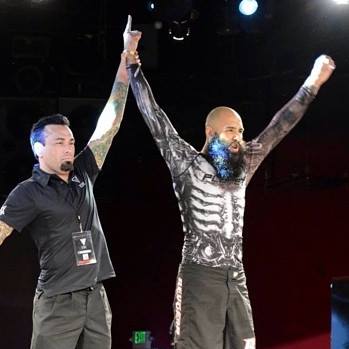 BJJEE: Thank you for sharing your advice. You, yourself, have also worked hard in order to earn what you’ve achieved so far. But, as you said, instructors are very important for our journeys.

Is there any specific advice that your head coach, Mr Eddie Bravo, has given to you and that has enabled you to become a better jiujiteiro? Perhaps something that stays well with you, until this day?

Richie: Eddie Bravo has given me a lot of amazing tips. But, to be honest, for him to tell me to be open minded and to be myself was the biggest thing that anyone could have told me at the time. He gave me the freedom to make my Jiu Jitsu into whatever I wanted to make out of it.

BJJEE: That sounds awesome! And I think it resonates with what you’ve said earlier; that feeling free in what you do is super important.

To conclude this interview, we’d like to ask you about a specific anecdote. The story goes that you didn’t have a lot of time to train when you were a white belt, and so that you decided to drill moves at home – with your girlfriend! And that this approach helped you progress a lot.

Could you tell us a bit about that?

Richie: Yeah! When I first started Jiu Jitsu, I had to drive for around one and a half or two hours just to go train, to the place where my brother and friends trained at. So I was only able to make it to class once and sometimes twice a week if I was lucky.
But I wanted to get better, so what I did was that I would drill the same move I learned previously, and I would drill it with my girlfriend at the time – she is my wife now – because that was the only way I would get to train more often.

I think it was a successful approach. It helped me understand the importance of drilling. But, at the same time, it was also a way to get my wife into Jiu Jitsu. That has been awesome, since she fell in love with BJJ as well – and she’s a brown belt now!

BJJEE: That is great! We’re happy for the two of you. And thank you very much for the interview, Richie. It has been a pleasure.

Richie: Thank you so much.