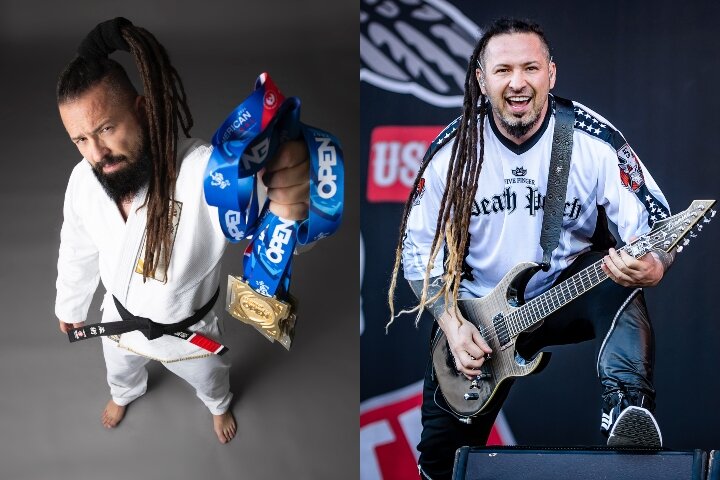 In an exclusive interview for BJJ Eastern Europe, Bathory spoke about his passion for Jiu-Jitsu, the similarities between music and BJJ, and becoming a success in life because of martial arts.

BJJEE: Thank you for joining us, Zoltan. Let’s start from the beginning: how did you begin your career in music? And how did the “Five Finger Death Punch” come to be?

Bathory: Becoming a musician is a calling of the soul. You have to have an unwavering passion for it, because making it in the music industry is extremely difficult, it’s less than one in a million. The chances to make even just a decent living out of it is really minuscule. So you have to do it for the right reasons, for the love of the music itself.

I was obsessed with becoming a guitar player but I grew up in communist Hungary, a poor country at the time so we couldn’t afford one. That wasn’t gonna stop me though… When I was around 12, I acquired some second hand parts and a fairly intact guitar neck; so I hit my parents coffee table with a jigsaw and made my first guitar.
It was a piece of c*ap but at least I could start somewhere.

Years of practice, building bands, recording, and performing followed. I was laser-focused on my goal. When I was 22, I arrived to America with a guitar and a bag of clothes. I didn’t even speak English… It was really difficult at first.
Learning the way of life here, the language, trying to survive out here alone… 10 years of uphill battle later, I founded the band “Five Finger Death Punch”.

From there, it took another 15 years of relentless touring to get to this point. Today we can headline arenas anywhere in the World, sure. But man, we earned every bit of this, it was definitely not an accidental overnight success. 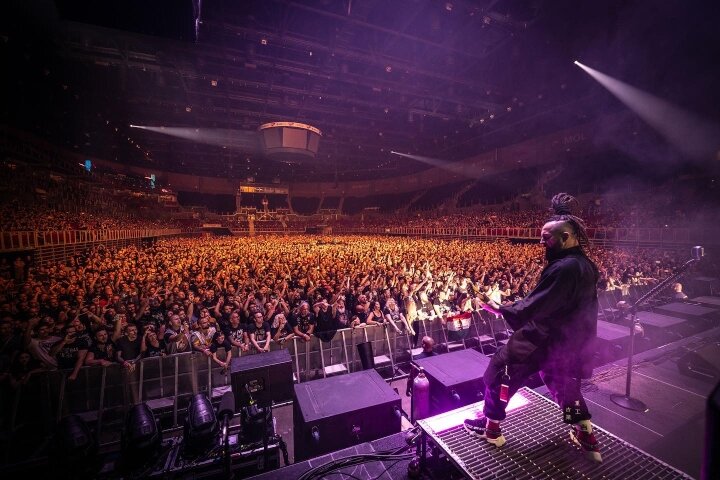 BJJEE: So it was quite a journey, to say the least. But what about martial arts? How have you begun training judo and how did you start training Jiu-Jitsu?

Bathory: From early on I was infatuated with martial arts, like… I was the kid that made his own throwing stars and nunchucks… Clocked myself in the face with it a thousand times… I was a big Bruce Lee fan, but there was no Kung Fu academy in Hungary.
However, Judo is an Olympic sport, so it was state sponsored and freely available everywhere. So I started Judo when I was 9 and I was competing by 11. I can say it pretty much shaped my life, the way I view things.

Later, here in America, I was teaching Judo tricks to a couple BJJ blue belts and through that I met a BJJ black belt who arranged a private lesson for me with Royce Gracie. I was blown away!
It was a whole new level of Ne-Waza. I was instantly hooked so I put on a white belt once again and started from the bottom.

I would travel with Royce sometimes Royler around the country to partake in their seminars. Later I officially joined the Gracie Las Vegas Competition team, led by 5th Degree Black Belt Mica Cipili.
I knew I was going to be a lifer, I dove in and within a few months I was going to my first BJJ competition. 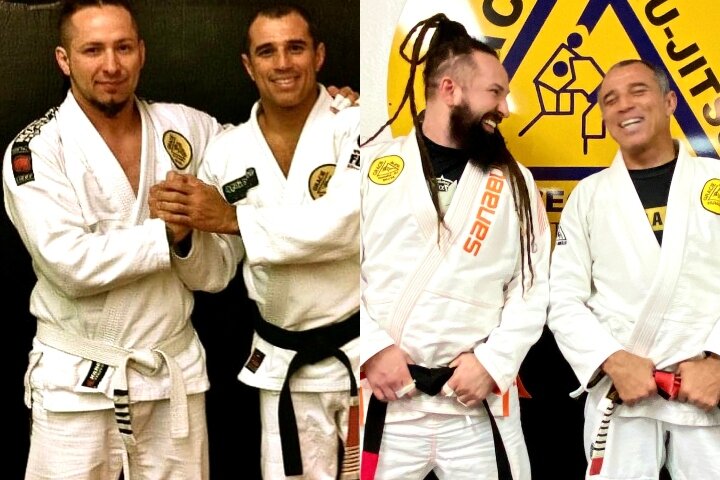 With Royler Gracie, as a white and black belt

BJJEE: Have you learned anything from music that you were able to apply to BJJ or vice versa?

Bathory: Music is about harmony, flow and balance… Just like martial arts.

On a high level, everything accords to the same Universal patterns. I could have said that snowboarding is about flow harmony and balance… Or a conversation or a relationship… Life itself is about harmony, flow and balance.

BJJEE: And what about the similarities between the worlds of music and BJJ?

Bathory: When we play festivals, there are all the other bands, they are friends we rarely see as they are on the road… Just like us. So, we rarely cross paths.
There is this great vibe backstage. Everyone is happy to see each other. It’s similar to going to competitions where all the fighters come together, I love that vibe.

I know a lot of people in the competition World. I’m good friends with almost all the guys I ever fought. That’s the beauty if it; the mutual respect and the friendships, even though we have to fight each other. There is a bond, a brotherhood.
Also, competitions give you a unique opportunity to train your mind how to deal with the inevitable. It’s you and your opponent, this is going to happen, you can’t run, nobody can help. It’s all you. You are getting tested and measured – similar to playing a big show.

Weirdly, I don’t have the “adrenaline dump”, I never had it. I don’t get nervous. On stage or at competitions.
I don’t care if my opponent is twice my size… Like it doesn’t matter if there are 100,000 people at the show. My heartbeat doesn’t even elevate. There is a calmness that comes over me in both situations and I LOVE that calmness. 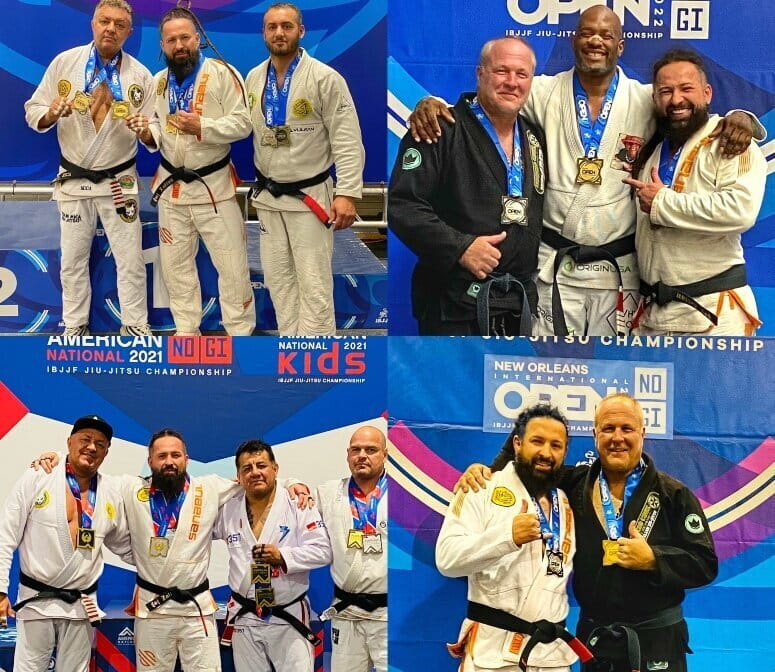 BJJEE: But how do you manage to keep training while on tour? Does it get exhausting or are you always high in energy?

Bathory: I hired BJJ black belts for band security so I could train on the road. We carry our mats and set up our “backstage dojo” every day.

As for “high energy”, not in the sense most people think of “high energy” – like the coffee buzzing, fast talking, zipping around sort of characters. No, that’s not me… I always thrived for a balanced life.
My band calls me “Spock” because I stay calm in the middle of absolute chaos calculating odds… I find logic and patterns in seemingly impossible situations. I don’t freak out, I don’t raise my voice, no big ups-and-downs.

My approach to life is more of a “steady pressure”; I plan and execute. And achieve.

BJJEE: And who do you usually roll with? Both on and off tour?

Bathory: When I’m home I train at Gracie Humaita Las Vegas, and when I’m on the road  it’s the “Back Stage Dojo”. And at this point we have a pretty extensive world wide network too. So, wherever we play we always have local guests too; fellow Jiu-Jitsu guys, UFC fighters coming out all the time to train with us.
It’s pretty normal to have 5-6 black belts rolling with us backstage.

BJJEE: You’re also an active competitor. Why do you compete, especially considering the fact that you’re already very successful?

Bathory: Because I’m one of you. I’m just a guy that loves and LIVES martial arts. I train with the general population and I put myself to a test at every chance I get. I compete, I teach classes and seminars, I’m all in.

I truly LOVE the competitions. Love the overall vibe at these events; when I walk into that arena, something in me just lights up. Martial art competitors are just a different breed… They are my people.

Also there is one thing most people don’t think of – something that doesn’t affect them, but affects any “celebrity” training martial arts: your legitimacy is always questioned.
“Did you get your belt because you are famous?”  “Are you any good?” “Is it an honorary rank?” “Did you really earn that?”… You are questioned even within the BJJ community, where we all know we don’t just hand out belts. By competing you extinguish all doubt.

Bathory: I didn’t get my black belt because I’m a “celebrity”.  It took a long time and a lot of black eyes and broken bones.

I competed in BJJ since I was a white belt and throughout this 13-14 years journey I got my ranks from Royler Gracie and Mica Cipili… Especially those two aren’t going to “award” anyone anything they didn’t earn.

But when you go out and compete in National and World Championship level tournaments and place on the podium… There is no more question of the legitimacy of your belt.
That’s not why I’m doing it, but it’s a nice bonus. 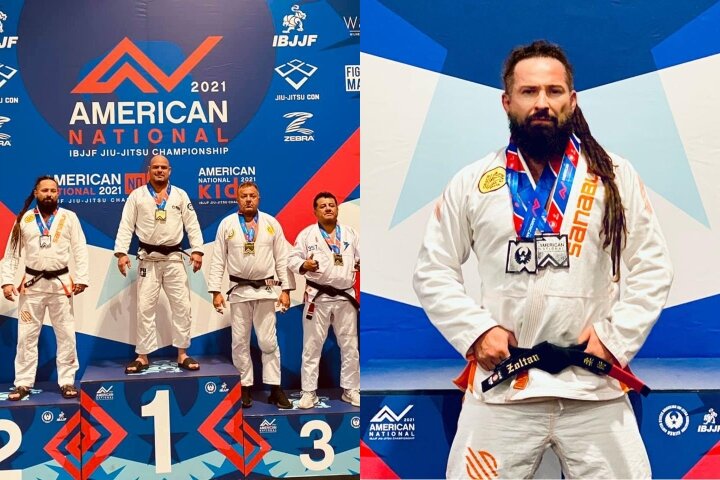 BJJEE: Thank you, Zoltan. And lastly, what would be your message to those reading this?

Bathory: Never ever quit! If your life becomes busy and you have to slow down then slow down, but don’t quit.

If you’re forced to take a break then take a break physically but not mentally! You can still watch BJJ videos, you can still keep your mind sharp and your technique intact.
Because, if you quit it’s not just the stamina and the technique that fades away but also your warrior mind state – and once you stop seeing the world as a martial artist it’s 100% that other areas of your life will also suffer.

Have you ever heard someone say: “My life got so much better after I quit martial arts”? Me neither.