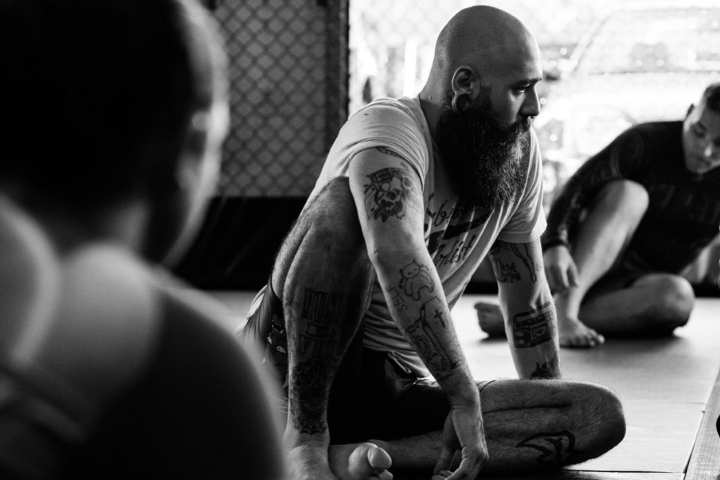 Richie “Boogeyman” Martinez, a 10th Planet black belt under Eddie Bravo, is known for his entertaining style and unorthodox moves. And one of the most important things that aided him in his BJJ success was breakdancing; an art form in and of itself, which he trained before ever being introduced to Jiu-Jitsu.
In an interview for BJJ Eastern Europe, the Boogeyman shared tidbits about his breakdancing journey and how it intertwined with Brazilian Jiu-Jitsu:

Before we did Jiu-Jitsu, me and Geo had danced for many years. We traveled all over the world doing it… It was exciting. But, actually, we started dancing because our next door neighbor at the time had came home from a family trip with his cousins, and he has learned a break dancing move – the windmill – with which he was always trying to show off in front of girls.
So, one day me and Geo started trying to copy break dance moves from the MTV and BET music videos, before anyone really had internet. And one day, our neighbor tried once again to show off, and so me and my brother went out there after him with our moves to shut him down. This was probably our first unofficial first dance battle (laughs).

Going to Jiu-Jitsu from dancing was never an intention for me. I never thought anything could give me the same passion or drive the dancing did until I found BJJ.

Essentially, we started Jiu-Jitsu because we had an opportunity to teach dancing at a Jiu-Jitsu school/Dance studio. Geo started doing it before I did and I’ve seen seen how competitive it was, so it made me want to try it out.
Me and Geo have always been competitive in everything we did, so it was kind of cool to find something new that we could compete at against others.

Martinez also shared why he thinks breakdancing helped his Jiu-Jitsu:

Dancing showed me how to move my body in ways that most people would never be able to. It showed me how to compete in front of huge crowds with no fear… Those are the two big things that I feel dancing helped me with.

Even though it sounds cliché, breakdancing is all about being free and having fun. If something isn’t that way for you, then why do it? That’s the best thing I could tell anyone trying to pursue breakdancing.
You will build yourself a lot by practicing it, especially in regards to your strength, balance, creativity and movement. All of this will help your Jiu-Jitsu.

Read our full interview with the Boogeyman here.