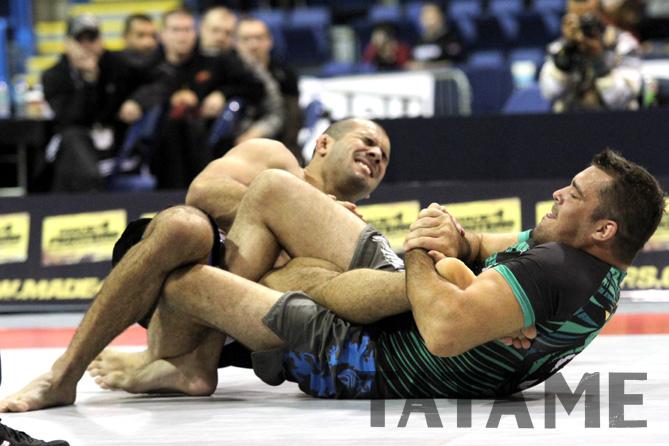 Dean Lister’s nickname is the Boogeyman. Maybe that’s because he has the habit of creeping up on the Jiu-Jitsu community from time to time. It all started in 2003, when he shocked the world by winning the absolute division at the ADCC. Last year, at another installment of the famous submission grappling event, he did it again by winning the under-99kg division, even inflicting a submission on none other than Rodolfo Vieira.

Lister will rear his head again at Metamoris, where he will take on Xande Ribeiro. They’ve fought once before, almost a decade ago, at the same ADCC 2003, and Xande came out on top. This time, Lister wants to settle the score. In the following interview, he revisits the first duel, talks about his strategy, speaks in praise of the rules and responds to Xande’s promise of tapping him out.

You and Xande fought submission grappling in 2003, at ADCC Brasil, and he won. What do you remember of that fight? Did you derive any lessons from that defeat?

Yes, of course I remember the fight… It was the day before I won the absolute division in 2003 in one of the most difficult ADCCs ever… Yes I remember that match, it was my last match as “stubborn” Dean. I was doing well and then I got tired, not because I had no gas, but because I mentally got frustrated.

After this I started being “real” to myself and seeing what I should do in matches, I found my personal way to relax and let my skill do the work… So yes that match is very important and meant a lot to me, I learned a lot. Imagine, the next day I even got revenge for Xande in ADCC absolute by footlocking the very good fighter “Cacareco” who footlocked Xande on Sunday. So for a good match against me, I learned so much that by the next day I footlocked the man who footlocked Xande… I was very happy that day. It was one of the best days of my life…

What’s the greatest danger Xande can offer you in the fight?

Xande is very experienced and very calm… He’s like a snake that hides without moving, very patient and smart. He doesn’t look very strong but he is, and when the time is right he can hit you with a deadly move!! That is Xande. He has many weapons, and I am very aware of all of them.

You had a great performance at last year’s ADCC, submitting Rodolfo Vieira and winning your weight division. How are you physically and technically today compared to then?

I am technically and physically better, I feel… But on fight day it seems to be most important that I am able to find “my time” to find “my moment”. As they say in English, to be in the “zone”. It is a strange thing to say, but my performance is more important than the result of this fight. If I am becoming a better fighter and performing well, this is what I tell my students, and I don’t just say it, I really mean it. I am proud to fight well under pressure

Being a 20-minute, no-points fight changes what in your training plan and game plan?

I am criticized a lot for not having a strategy usually. I said I used to be stubborn and I am not so much anymore… However, if I find someone else’s strategy that doesn’t work for me, then I will be lying to myself. I don’t like to lie to myself, I want the truth… The truth happens when after someone is finished… As a samurai lives and dies by the sword, I also live and die by my technique, if it doesn’t work for me then I will only find out how to become a better fighter. I am used to and prefer the longer matches of 20 minutes because it is harder for an opponent to hold me and wait to win by a point. It’s “chato” [boring]!

Are you setting a strategy or do you intend to go with the flow and act as opportunities appear?

I have an idea of what I want to do, but everyone knows what I do so I have no intention of hiding this. I will go for the submission always… If this is a weak point of mine and my adversary takes advantage of this, then I accept that… I would rather lose by submission than win a boring decision by one point! Of course it is my intention to win by submission. For instance I must give respect to my last opponent, Ricardo “Demente” Abreu, because he passed my guard and he didn’t just try to hold me and wait, he tried to armlock me, he also tried to footlock me. This is something I respect more than someone who just hugs me like a girlfriend.

For you, what is the importance of events like Metamoris for pro fighters?

I really like this event, I also really like ADCC. I have a passion for this because we are all true martial artists but also world-level athletes… The level of respect between everyone in the event including myself and Xande is ultimate.

Do you consider that in 20 minutes, technique overcomes power?

What do you think about Xande claiming he will get a submission on you and put an end to your professional record of “never tapping out”?

I am very curious about what move he has been planning to use on me and to see him try it. I am very excited to have him try this on me… That is what I want… There is a saying: “Your opponent is your greatest professor”, so on Sunday maybe he can teach me something and maybe I can teach him something… In the end, we both win….