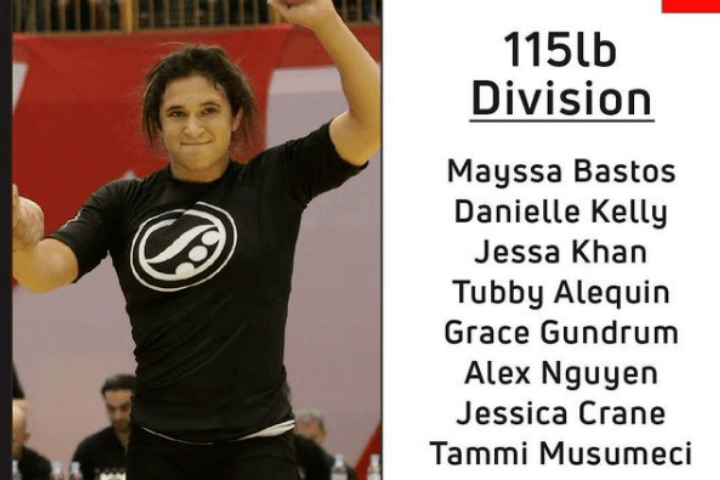 The upcoming Who’s Number One tournament will take place mid-September this year! And yes, you’ve guessed it right: the promotion has announced their 115lb division bracket – and it is an amazing one.
It’s going to be comprised of a total of eight women: Danielle Kelly, Mayssa Bastos, Jessica Crane, Jessa Khan, Amanda Alequin, Grace Gundrum, Alex My Nguyen, and… Wait for it… Tammi Musumeci!

Tammi is Mikey Musumeci‘s sister, who won the World Championships back in 2019. She is a three-time No Gi World Champion in total, and a two-time Pans champion as well. But, ever since 2019, she wasn’t active on the competition podium.
She will have a lot of phenomenal athletes to compete against, though. Grace Gundrum is a 10th Planet athlete, who acquired the flyweight title at the last year’s Fight To Win event (F2W 155). She also holds a win against Danielle Kelly; who, herself, recently won her Fury Pro Grappling main event match against Sofie Amarante.

Jessa Khan’s most recent match at the WNO was back in May, when she submitted Pati Fontes for the win. Mayssa Bastos complied great successes behind her as well; she stopped Khan in the semifinals at No Gi Pans earlier this year, winning the gold in the the end! And she had also defeated Gundrum at WNO back in December 2020.
Jessica Crane is an another Who’s Number One long-time competitor, though she did lose to Kelly in her most recent match. Alex My Nyugen, on the other hand, is slowly building her grappling resume – and is set to fight at the highest of levels year round; while Amanda Alequin made history recently, becoming the first female two-division Fight To Win champion at F2W 171.