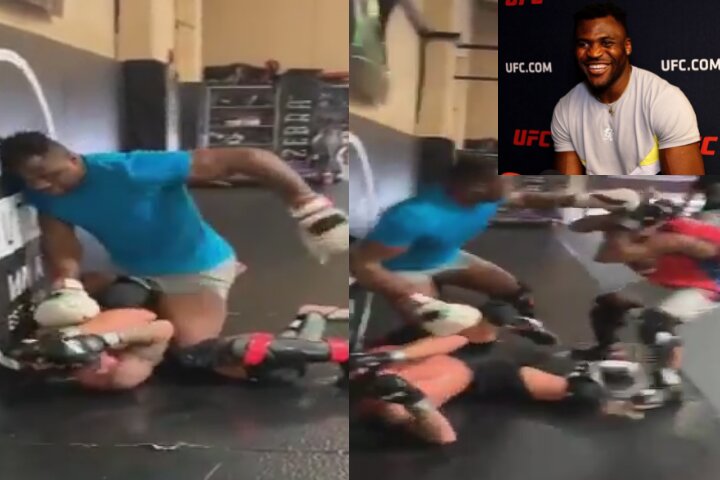 You wouldn’t want to stand in the way of Francis “The Predator” Ngannou – not in your wildest dreams. The current UFC Heavyweight champion captured his title back in March this year, when he knocked out longtime titleholder Stipe Miočić inside two rounds.

Ngannou has had a tough life. At the age of 26, he emigrated from Cameroon in order to reach France and pursue a boxing career. As he reached Europe, he was first jailed for two months for illegally crossing into the country. Then, when he eventually reached Paris, he had no money and no friends there; living homeless on the streets.
He began training MMA in 2013 – eventually finding enormous success within the sport.

The Predator’s next fight is scheduled for January 22, 2022, against Ciryl Gane. He’s training hard for the upcoming bout – but it seems that he is also having fun while at it!
Francis recently posted a video of himself sparring two guys guys at once. And as you can see, the two don’t quite stand a chance against Ngannou’s prowess:

Other than for his fearsome success in mixed martial arts, Ngannou is also known for his easy-going and entertaining personality. For instance, earlier this year he met Shaquille O’Neal – the famous basketball player who stands at 7ft1 and weighs 350lbs… And picked him up as if it was nothing!

.@Shaq you’re not so heavy as I thought 🤣🤣🤣 that’s probably why you could fly on the court pic.twitter.com/oUJmVpyYB1